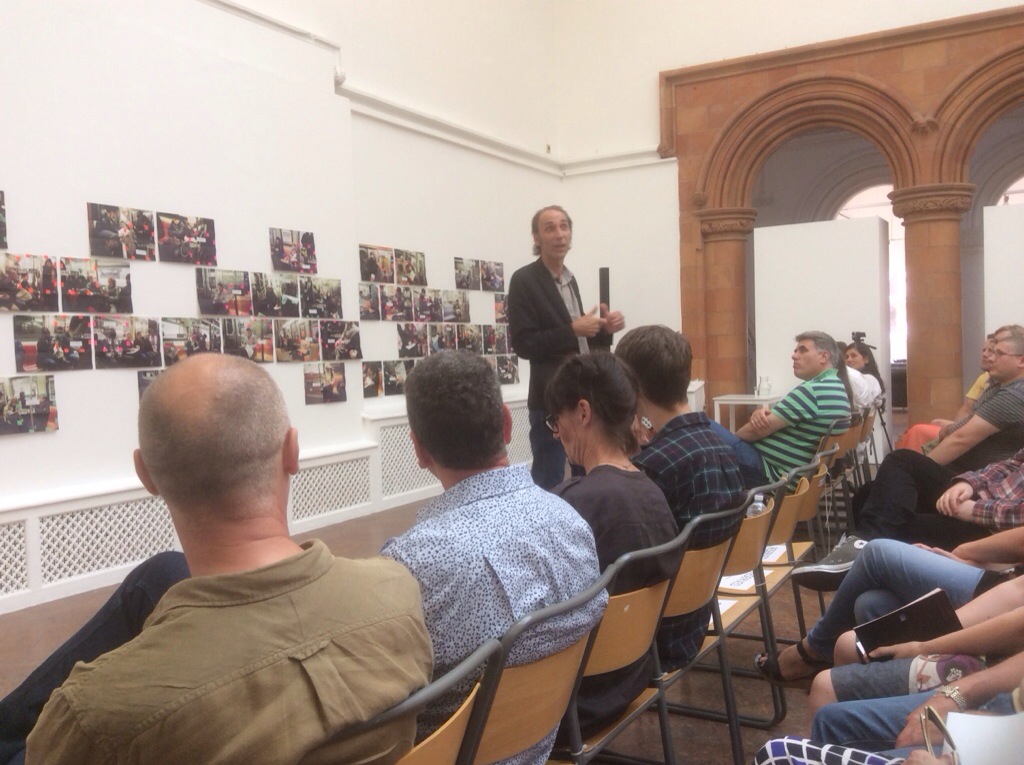 Writer and Journalist Will Self was in Manchester on Friday night-About Manchester went to see what he had to say.

Urban psychosis, the finely balanced state of the modern city between its busy and bustling environment to a reality which is temporarily obscured.

Who better then to talk about the subject that writer Will Self who has spent at least some of his time holed up in Manchester recently writing his latest novel Shark and was talking at Manchester Metropolitan University’s Holden Gallery.

The modern city is a relatively new thing and one of its biproducts is how the individual responds to how to live within it said Self. The only way to deal with its was to take a blasé view, to almost switch off because there is too simply too much to take in.

Self’s novels, his most recent Umbrella, described by one critic as “400 pages of unbroken stream-of-consciousness dotted across three time frames, leaping jaggedly between four points of view, and with barely a paragraph break, let alone a chapter heading” dealt with people waking from fifty years of sleeping sickness.

So what was Psychosis, he asked? Hearing voices of those that are not present, fearing a sense of disorientation and a stunned silence as the writer tells the audience that the majority in the room are taking some firm of anti depressant.

Psychosis after all is a mere arbitrary term, we all thing we know what it means pathologically but not in terms of the people who surround us on the street who have it. Indeed the urban environment, what is anybody’s reality and how does ours interact with others?

Sixteen years ago , he recalled, he visited the ice hotel in Sweden on a press trip and returning to middle class white London, people said to him is it cold? ‘Of course its cold’ was his response, ‘it’s a hotel made of ice’ but they they would say inside an igloo it is warm, ‘ well no it is freezing but outside it is -40 and if it wasn’t freezing, the f******* igloo would melt.’

But to digress, on his way to the hotel, he landed in Stockholm and had a couple of hours to kill, there were middle aged pink skinned blond middle class businessmen walking up and down talking to themselves-“had I landed in a psychotic airport? No they were using the first Bluetooth Nokia phones before it was common in London.

Now when he sees people talking to themselves in the street, he would guess in a weird game whether they were schizophrenia or hand free.

Digital media is radically transforming urban space. It’s the second in the past two hundred years such a transformation has occurred. Around 1910 the urban stance became decoupled from human psychology as the technologies to move around freed our experiences from the human condition that had lasted since the dawn of civilization.No longer did we move around the city at 4mph.

We have all grown up in that environment and now digital is producing a new experience further shaking our ancestral programming.

On the way to the talk, he walked passed Manchester One, a neo liberal urban prison he describes it, with its slogans such as bringing work to life

That is what digital media has done he says, it has made our work to all, once we were told the computer would release us from work, that brief period is over, now it is the opposite, work is 24 hour.

Manchester has been peculiarly ill served by the new urbanism where space itself has become so scarce, architects have made their developments appear priceless. Beetham Tower to Self is the ultimate in a logo building.

Urban architecture was never going to be far from Self’s critique.

Wooden cladding!!! what goes through your tiny mind they put that up, it will look rustic,warm? no it will look like a piece of crap nailed to it in ten years time.”

Buildings are built by cad design now where money and space is the coefficient and they are unlikely to last more than fifty years.

To London and the monstrosity that is The shard, “like a festival tent that will have to be taken down……if you start to look at the city like this, you see it in terms of profit margins, but that is not a common sense reality, we should be bringing work to life and drink cappuccinos.”

When the mechanised city came in, we no longer measured our movement until then we all walked,we knew the city,we knew the maps.

Now digital media removes us from any necessity to know where we are as we use GPS technology all the time-knowing where you are as been at the nexus of our human mind, being able to respond to our surroundings.

In the city we are compelled to move around largely if not wholly to consume, go to A to eat, go to B to earn. Self feels the strategy makes him feel alienated and it overpowered him so he looked for strategies to beat it, to become freed of the economic need.

So he began practicing pyschogeography to reconnect with the environment and to stop being phycotic.

He felt like an explorer, you can walk the 18 miles only three of that needs to be on public roads if you know where you are.”

There are key moments when you can step outside the city, by effecting a random transit with no objective, you start to know where you are, and you know what, he says, it really does work.

He finished on the note that we are all skeptical and we often don’t want to do it but if you do it, go with a generally open mind and no preconceived ideas.