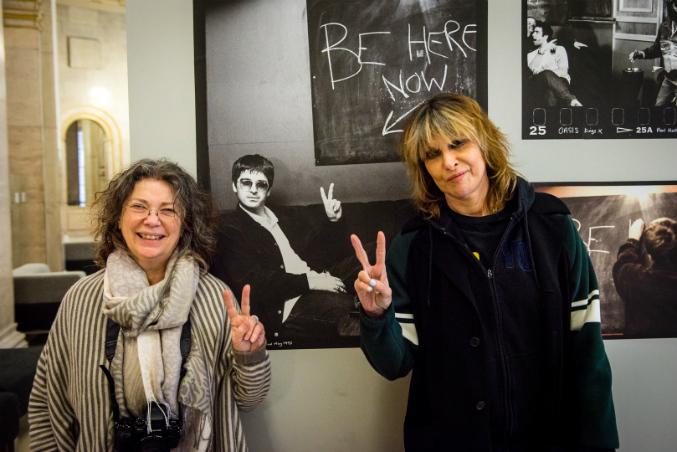 Rock legend Chrissie Hynde dropped into Manchester Central Library for a tour of the Oasis:DNA exhibition.

Chrissie was accompanied by her long-time friend Jill Furmanovsky – the photographer behind the Oasis exhibition.

Jill and Chrissie met in London during the heyday of punk in the late 1970s and have worked together ever since.

Chrissie said: “We’ve been mates for a long time and I can always call Jill with some daft idea and she says, “let’s do it”. So we have a huge archive now”.

“I have enough stuff on file to do a similar exhibition on Chrissie”, confirmed Jill.

The exhibition includes a picture taken at a 1994 Oasis gig in Cambridge. It was the first time Jill had seen the band play – and she took Chrissie with her to check the young pretenders out.

“I remember that show and I thought they were a great band at the time, I loved them. And the camera loved them”, Chrissie said.

“This is an exhibition of beautiful photographs of a great band and it gives a really good retrospective”, added Chrissie. “I just wish it was more up to date and that they hadn’t stopped when they did.

“Like everyone else, I just hope they get back together. I know they have their family differences, but come on – think of your audience!”

Jill added: “I have loved working with Central Library for this exhibition and I would love it to stay in Manchester permanently. It would be great to have a home for it in the city, because this band is part of Manchester’s cultural DNA.”

Chrissie said: “We don’t need a rock’n’roll hall of fame in the UK, but we do need living, breathing exhibitions like this one.

“If I was a young American rock’n’roller coming to the UK today, Manchester would definitely be on my list of places to go.”

£330bn in loan guarantees, up and running by next week, and a “whatever it...