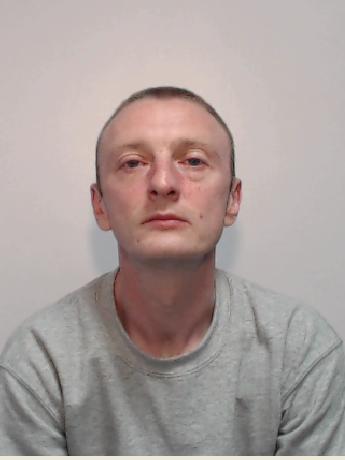 A convicted murderer who set fire to a flat to conceal his crime has been jailed and will spend the rest of his life in prison.

Alan Maidment aged 41 of Ludlow Avenue, Salford was jailed today  at Manchester Crown Court, Crown Square. He was found guilty of murder after a trial and pleaded guilty to five counts of robbery at an earlier hearing.

He was sentenced to life in prison with a whole life tariff.

Maidment was also given a six year prison sentence after committing five knifepoint robberies, and a further two years for possession of a bladed weapon. He will serve these sentences concurrently.

On Tuesday 21 March this year Maidment walked to a flat on Berry Street in Swinton armed with a knife, after he was told by his ex-girlfriend that she had been assaulted by the man she was lodging with, 47-year-old Thomas Jones.

He knocked on Thomas’ door and as the door was opened, Maidment stabbed him a number of times. He then followed Thomas into the flat where he continued to stab him, even though he believed he was already dead.

Following the attack, Maidment dragged Thomas’ body to the living room where he placed a number of items over the body. He set the items alight using a lighter and pages ripped from an Argos catalogue, before running from the flat.

Just a short distance away from the scene, Maidment became unconvinced that the fire had started properly so searched through a rubbish bin and got an empty milkshake carton.

He then made his way to a nearby petrol station where he emptied pump remnants into the makeshift container.

Armed with the fuel, he returned to the murder scene but the fire service had already responded and were extinguishing the flames.

He sat on a bench opposite the flat and waited, watching fire officers combat the blaze.

He cleaned the knife using the petrol before discarding it along with the victim’s phone, a short distance away. He also threw his outer clothing into some water nearby and went home.

Officers launched an investigation and a man and a woman were arrested on suspicion of Thomas’ murder.

Ten days later , Maidment went to a snooker hall where he began drinking and taking cocaine, ecstasy and cannabis.

After consuming the cocktail of drugs, he committed five knifepoint robberies on Coalshaw Green Park in Chadderton in a short, five minute period.

He then went to McDonalds, off Broadway in Chadderton, again armed with a knife, and told staff to contact police, confessing he had committed a murder.

Officers attended and arrested Maidment on suspicion of murder. The two people previously arrested were released without charge.

A post-mortem examination proved Thomas Jones suffered 32 stab wounds to his body including the chest and abdomen.

“Alan Maidment is a particularly dangerous individual who was only released from prison on life license in June 2016, after killing another man. He will now spend the rest of his life behind bars to contemplate his actions.

“My thoughts are with Thomas’ family and the other victims in this case who now have to deal with the aftermath of Maidment’s violent actions.”

Three in court following spate of robberies and violence