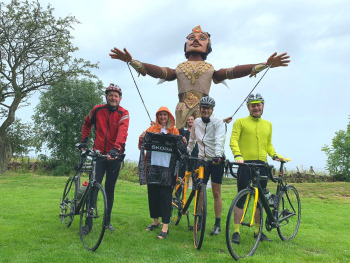 LOCAL cyclists know only too well the challenge presented by Werneth Low so it comes as no surprise it has been crowned as one of the celebrated ‘King of Mountain’ climbs in the Tour of Britain.

All eyes will be on the peak as well as other local landmarks when the cycle race, which will be broadcast live on ITV4, passes through Tameside on Saturday 14 September and it’s a great opportunity to showcase the borough.

Schools, businesses, community groups and residents are encouraged to get involved by dressing and lining the route, which will pass through Gee Cross, Hattersley, Mottram, Stalybridge, Millbrook and Mossley at around midday on the day of the final leg of the race.

Ideas include painting bicycles in one or all three of the Tour of Britain colours – red, white and blue – and displaying or mounting in front of shops and front gardens. Or people can create floral displays and put up bunting.

The Tour of Britain event will be followed the next day (Sunday 15 September) with Tameside Cycling Festival in Stalybridge, which will be full of exciting activities for all the family.