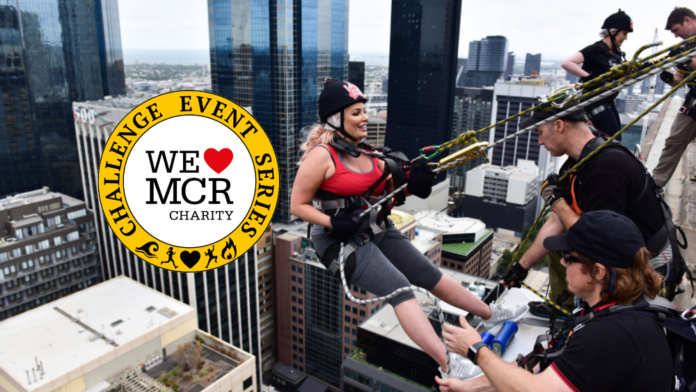 After a series of online polls this month, the Manchester public have decided that We Love MCR’s next fundraising event will be an abseil at dizzying heights off one of the many gleaming towers that make up Manchester’s growing skyline.

This will be the second instalment in We Love MCR Charity’s ‘Challenge Event Series’ – setting mind-over-matter challenges that raise funds for their work supporting Manchester’s communities and young people. Their first Challenge Event saw the Charity pull off a scorching fire-walk in St. Peter’s Square last October, raising over £18,000!

“How could we top a firewalk? By going up into the sky! Our tower-block abseil will give people a chance to see the city from a birds-eye view, then step off and walk down the side of the tower. Our fearless supporters are really raising their game with this challenge.”

The abseil will take place in July and We Love MCR expects it will be over-subscribed. To reserve a guaranteed place, the charity has opened a pre-registration list for brave fundraisers to book their place “on the rope”. The secret location has not been revealed, but We Love MCR promises it is going to be somewhere very special… You can pre-register for a place here.

The votes in the poll to select the Challenge raised a few eyebrows. The two most popular event ideas went head-to-head in a final poll – with the Tower-Block Abseil winning narrowly by 54% to 46% versus the North East Skinny Dip. Ged Carter commented “We’re excited that the Abseil is the winning choice. But 46% choosing a seaside dip in their birthday suits? Manchester – who knew?! Maybe next year….”

Chorlton and Longsight libraries to get revamp