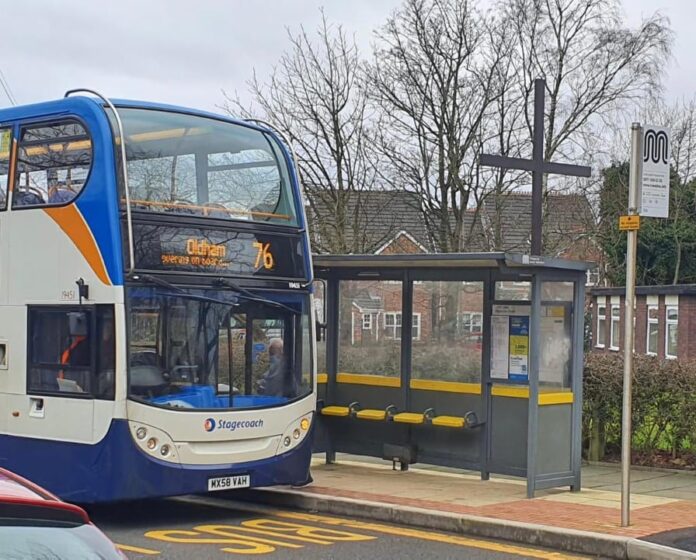 Failsworth’s Labour Councillors have demanded answers from bus company Stagecoach over cuts to a service in their patch.

From 17th January the 76 bus, which connects Oldham to Manchester via Failsworth, had its frequency cut without explanation. The service, which ran every 10 minutes during the daytime Monday – Saturday, has been cut to run only every 12.

Failsworth West Councillor Pete Davis said, “I know that this doesn’t sound like a big cut on paper, but a service every 10 minutes meant people didn’t have to worry about timetables, they could just go to the stop and a bus would come along soon enough. I understand that the bus companies are having difficulties at the moment with driver shortages but people would like to know why the service has been cut and whether it’s permanent or temporary.”

Pete’s colleague in Failsworth West, Councillor Elaine Garry, is concerned that the 10 minute frequency may never come back. She said, “It’s very suspicious that Stagecoach didn’t give a reason for this cutback. If they did, we could measure when passenger numbers were back up or when they had enough drivers. I am worried that this reduction may be permanent, not least because the Tory Government is ending the coronavirus financial support for bus services at the end of April and there has been a lot of coverage about how this could make lots of routes unviable.”

The Councillors’ letter demands answers on why the service was reduced, whether it is permanent and, if not, when the 10 minute frequency can be expected to come back.

Failsworth East Councillor Norman Briggs said, “We just want an explanation. Lots of people still think that the buses are run by the Council rather than by private companies and so they come to us with problems. It is embarrassing not being able to give them a response and the reason we can’t is because Stagecoach haven’t given us a reason for the change.”

A Stagecoach spokesperson said: “As is the case with other transport operators and many other organisations, we’ve seen a continuing impact on our staffing levels as a result of the pandemic.

“Our teams are working very hard to continue running our planned services for customers, as they have throughout the pandemic. However, due to the increasing numbers of employees impacted by the virus, we had to make some temporary changes to some of our services from the 17 January, which included the temporary change to the 76 service from a 10-minute frequency to 12 minutes.

“These temporary changes were made in consultation with TfGM, and following close monitoring of passenger numbers to ensure the changes had a minimal impact on our customers. We also advised our customers, through our service change communications, of the reason for these changes and that this was a temporary change and reassured them that we are working hard to return to normal service as soon as possible.”

33 year old jailed after being snareda thinking he was meeting an 11 year...