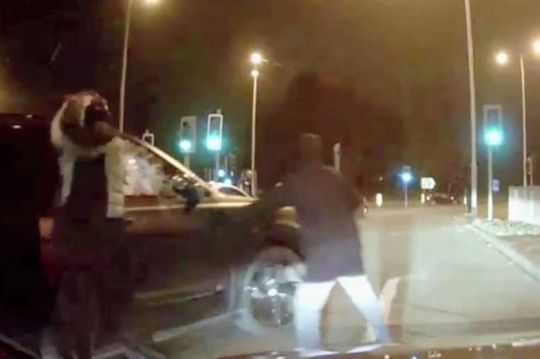 Police have released CCTV footage as two masked men tried to smash the windows of a Bentley in Bury as the driver stopped at traffic lights last week.

The incident happened at 6.20pm on Angouleme Way on Wednesday 15Th.

Four offenders on two mopeds followed the Bentley Bentayga as it travelled along Angouleme Way in Bury.As the traffic came to a stop at a set of traffic lights, two offenders approached the car and repeatedly smashed the driver’s window and windscreen with axes.

The driver, a 51-year-old woman, tried to manoeuvre her car but the offenders persistently hammered against the windows whilst demanding she hand over her watch.She refused before managing to drive away.

Police have released dash cam footage of the attack and are appealing to anyone with any information.

Detective Sergeant Ian Partington, of GMP’s Bury borough, said: “As you will see from the footage, this was a disturbing and unprovoked attack on an innocent woman as she sat in her car at a junction.

“Fortunately she wasn’t injured but that doesn’t excuse the horrific actions of these men which could have had awful consequences.

“If you know anything about this attack or the men in the video, I would urge you to come forward so that we can ensure the men responsible are held accountable and prosecuted.”