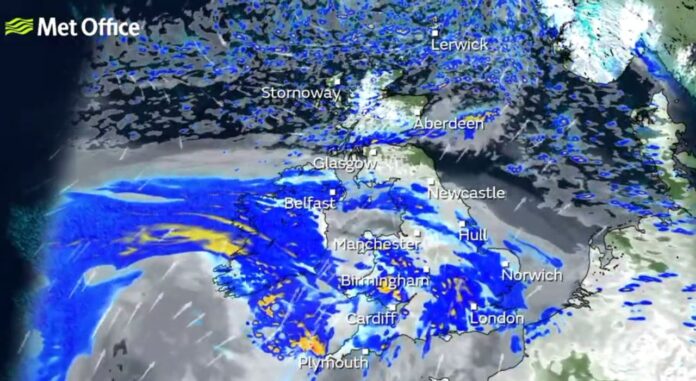 Amber warnings have been placed across Greater Manchester and much of the North for tomorrow as the first named storm of 2021 is set to bring heavy rainfall and flooding.

Storm Christoph is set to deluge Britain with two months worth of rain in 36 hours as the Met Office warned of heavy rain and flooding “likely on Tuesday, Wednesday and Thursday”.

Between 40 and 70mm of rain expectedly widely across the whole area covered by the amber warning which now covers large swathes of the Midlands, northern England, southern Scotland and Northern Ireland.

Assistant Chief Constable Nick Bailey, Chair of the GM Strategic Coordination Group for Storm Christoph, said: “We are aware that Storm Christoph is due to reach the North West tomorrow and I want to reassure the public that we’re working alongside other agencies across the region – including local authorities and emergency services – to ensure that Greater Manchester is as prepared as possible.

“An amber weather warning remains in place for most of Greater Manchester and you should contact your local authority if you are concerned about flooding in your area, but always call 999 in an emergency.

“Heavy rainfall is expected across large parts of the North West over the next 48 hours and we’d advise people to only travel if absolutely necessary and to take great care when using the roads.

Half of workers want extension to the Furlough scheme