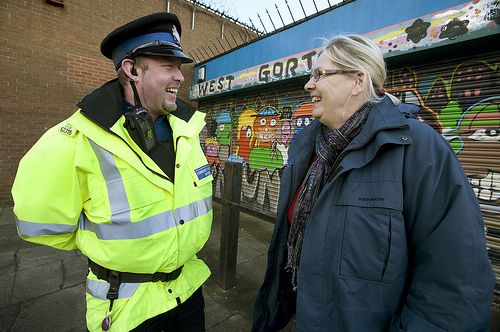 Every resident in Greater Manchester will have their own named contactable neighbourhood officer and a PCSO.

The news came as the Mayor of Greater Manchester Andy Burnham, Deputy Mayor Beverley Hughes and acting Chief Constable Ian Pilling outlined the progress made since the inspection report that was released before Christmas which highlighted majorshortcomings in the recording of violent crime, including serious concerns around its safeguarding of vulnerable people.

Today said the Mayor “signals the start of a new era for our police force with a new emphasis on positive, accountable, victim-centred policing. I am grateful to the Acting Chief and all the GMP team for the work done to put us in this position and we are all ready to be rightly held to account for delivering what we have said today.”

There are now 667 more police officers in GMP than there were in 2017 and numbers will increase again this year said the Mayor and as part of this progress the Mayor announced that from today, every resident in Greater Manchester will have a named, contactable local Police Officer and Police Community Support Officer.

People can find out who they are by going onto the GMP website, enter their postcode and, if they wish contact them directly

” It will allow the public to follow up concerns raised or report more general issues affecting the local area. It will help officers better understand residents’ concerns, improve public confidence in policing and, we believe, reduce the risks identified by HMIC of crimes going unreported and victims unsupported.” said Andy Burnham

There will be a cost with a proposed a headline increase in the police precept in Greater Manchester for financial year 2021/22 of £15 – or up to £1.25 a month.

For the majority of our council taxpayers, in Band B properties, it will mean an £11.66 a year increase. Only residents with Band D properties will pay the full £15 a year.

If the increase is approved,it will allow the force to expand tehir frontline numbers by an additional 325 officers – which will mean almost 1,000 more police officers in GMP since 2017.

It will create a new city-centre team concentrating on violence reduction and improving the safety of the city centre particularly the Piccadilly Gardens area, complementing the environmental improvements being made by the City Council and there will be an accelerating investment in equipment and clothing for frontline officers – including footwear – and enhanced training.

“Even though we are asking our frontline line officers to be more contactable to the public, I would never expect them to promise things which they know are beyond what they can do.If they can’t respond immediately, I would want them to be up-front and honest with people about that. The vast majority of people will understand and know that officers have to prioritise. What the public won’t accept is complaints disappearing into a black hole or excuses about a lack of resources. And nor will I.

This culture of positive policing – increased openness, honesty and accountability – should run through everything GMP does. If mistakes are made and things aren’t right, it should be acknowledged up front and a commitment made to put it right. If we are honest, that hasn’t always been the GMP way in the past. But, let me be crystal clear, that is what I want to see.

I am confident we can get there because, despite this, there is a lot that is right about what GMP does and I know we have thousands of dedicated people working within it who are in the job for the right reasons and provide a brilliant service to the public.

There are those who wish to run our police force down for political reasons. But I am not going to let them do that. Yes, I will challenge GMP where they need to improve. But I will also proudly stand up for them where they are getting things right – and they are in many areas.

As I said last year, the response to events at Manchester Arena has been outstanding in so many respects – from the quality of the investigation which led to a conviction to the compassionate support of the bereaved families.”

We have now seen the launch of two major criminal investigations.Operation Green Jacket, which concerns victims from Operation Augusta, has so far identified 71 victims, over 125 perpetrators and has resulted in a number of arrests.Overall, there are 68 separate multiple-victim, multiple-offender investigations running across GM alongside hundreds of single victim investigations.To support this, the force has gone further and established a dedicated, force-wide team to deal with complex CSE investigations where there are multiple victims or offenders. The team is one of the first major CSE units in the country and has been recognised by the national team that leads in this area as being best practice. We will say more about it in the coming weeks.” adding

But we can say today that, overall, 85 offenders were convicted of CSE related offences last year with total sentences handed down up to 126 years 8 months; 10 suspects are awaiting trial for CSE-related offences and 14 awaiting sentence.

The first set of Andean bear twins EVER to be born in the UK...