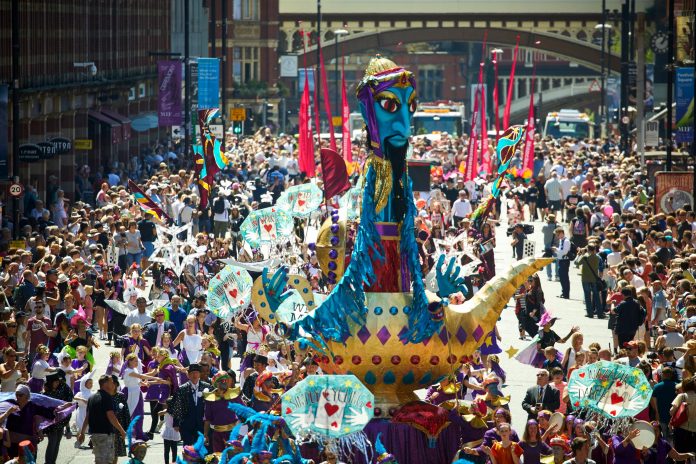 The UK’s biggest community celebration will return on Sunday 17 June and organisers are now accepting applications for groups to be part of the show of the summer.

Each year Manchester Day transforms the city centre with a cacophony of colour, sound and artistry – and this year will be no exception as the event celebrates the city with the theme “Word on the Street”.

Commissioned by Manchester City Council and brought to life by outdoor art specialists Walk the Plank, this year’s event will celebrate the diversity and community across the city, which is a huge part of Manchester’s history, present and future. It’s an opportunity for Manchester people to come together and listen to what people across the city are saying.

Manchester Day is a chance to remind ourselves what the word on the street was one hundred years ago when the Suffragettes were fighting to get votes for women; or the streets around the city’s universities as some of history’s greatest discoveries were being made; or the streets of the industrial revolution during the birth of the world’s first modern city.

More than 2,000 people parade through the street each Manchester Day in celebration of everything that makes the city a brilliant place to work, live and visit, while the Squares across town become pop-up venues for the day showcasing the talents of the best performers from across the region. Unbeatable street food and drink tops is the cherry on the cake.

Every float, artwork, prop and costume is made completely by hand and organisers are also looking for an army of creative people to volunteer right up to the event to create the spectacle in June.

Even if you’re not part of a group, The WOW Crowd gives individuals a chance to take part, which is a great opportunity to meet people, work with artists, musicians and performers, and be part of a fantastic day of community celebration.

If you want to apply to be part of Manchester Day 2018 please apply at: www.manchesterday.co.uk/participate-perform

Deadline for applications is Monday 5 February.