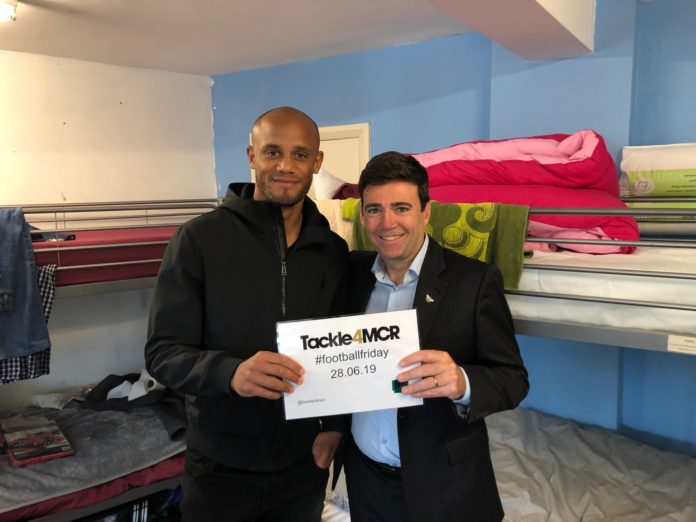 People are being urged to take part in #FootballFriday – a unique fundraising initiative that will help tackle homelessness and rough sleeping.

Vincent Kompany and Mayor Andy Burnham’s Tackle4MCR and Hits Radio Cash for Kids have joined forces to create #FootballFriday, which will take place on June 28.

The fundraising day encourages people to wear their football colours. Colleagues or classmates are also being encouraged to organise charity football matches.

Funds raised from the campaign will go to help local young people at risk of homelessness with Hits Radio Cash for Kids teaming up with the UK’s leading youth homelessness charity, Centrepoint.

Treble winning former Manchester City captain Vincent Kompany, of Tackle4MCR, has spoken directly to people across the city region in a bid to get “everyone involved”.

He said: “People of Manchester, it’s your chance to get involved in #FootballFriday and help tackle rough sleeping and homelessness across our city region.

“On June 28 we want you to wear your football colours to work and to school.

“By getting involved and making donations we can together solve a crisis that is close to my heart. No one should be homeless; everyone should have a roof over their head.

#FootballFriday comes after Belgium captain Kompany last year pledged, through Tackle4MCR, to make use of the momentum generated by his Testimonial season at Manchester City to assist the Mayor with one of his top priorities, homelessness and rough sleeping.

Mayor of Greater Manchester, Andy Burnham, said: “At home, at work, wherever you are, everyone is enjoying the Women’s World Cup and the exploits of our exciting and talented Lionesses. Later this month, on Friday, June 28, it’s Greater Manchester’s first ever #FootballFriday, fundraising to tackle homelessness and rough sleeping in our city-region. We want you to wear your colours with pride to work, or wherever you are, and get behind this amazing initiative that will support our campaign.

“Wear your colours, post a picture, but crucially, make a donation. Vincent Kompany, who will always be a Manchester City legend, has led the way with his personal commitment to the cause and his organisation, Tackle4MCR, is doing inspirational work. Homelessness and in particular rough sleeping is a humanitarian crisis – let’s come together and work to end the need for rough sleeping here in Greater Manchester.”

Since then Centrepoint has launched the Centrepoint Helpline in the city to provide tailored local advice to any young person at risk of homelessness. The Helpline is free to contact on 0808 800 0661 or at Centrepoint.org.uk/helpline.

Shannon Vaughan, Regional Fundraising Manager at Centrepoint Manchester, said: “It is a real privilege for Centrepoint to be supported by this fantastic city-wide initiative.

“The support from the people of Manchester, Vincent Kompany, Andy Burnham and Hits Radio Cash for Kids will help Centrepoint to not only support the young people in Manchester who are facing homelessness, but to also make sure that they have the best future possible.”

To get involved with #Football Friday please visit www.HitsRadio.co.uk/footballfriday