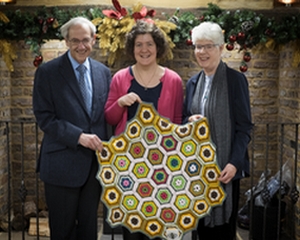 THE parents of a theatre practitioner at North Manchester General Hospital have created a lasting memorial to those caught up in the Manchester Arena terror attack in 2017.

Chris and Tim Edwards, who live near Scunthorpe, were moved by the horrific events when a bomb went off following a concert in May 2017, where 22 people lost their lives.  They therefore decided to create something in dedication for everyone who helped at the scene or in the hospitals treating patients, and also for the victims and their families. Over six months Chris created a crocheted rug which is rich in symbolism of Manchester.

Their daughter Jo Williamson, who was on duty at North Manchester General Hospital, the day after the bomb went off, explains: “I shall never forget the atmosphere on that day.  We were all only too aware of knowing we had received patients and their loved ones suddenly going from what should have been a happy event to finding themselves in life changing situations in hospital.

“I remember hearing that staff saw injuries that only military medical personnel have seen before in war zone environments, not Manchester.  We are good at providing compassionate, skilled care to patients and their families, but I think we as staff also made an extra effort to show care and kindness to each other.  I thought about how strong Manchester is and how its people ‘knit together’ in dark times.

“I talked to my parents about what had happened and so was extremely thrilled from I visited them months later to see that they had crafted the rug to represent the coming together of all involved and had created it with their thoughts, compassion and warm wishes.”

The knee rug takes its colours from the Manchester Coat of Arms and the bee symbolism which is associated with Manchester has been woven into it by using hexagon shapes which resemble honeycomb and a Manchester bee created by Jo’s father has also been sewn onto the rug.

Jo tweeted the story of the creation of the rug and following lots of interest, it caught the attention of Greater Manchester Police who invited Jo and her parents to bring the rug to the launch event of #WeStandTogether.  This is a registered charity, established by the former GMP Chief Constable Sir Peter Fahey which aims to celebrate differences, fight hatred and intolerance and build a safer and stronger country by promoting community cohesion.

Chris Edwards said: “We enjoyed making the rug as both of us have been patients in hospital and it was the little touches and kindly words that helped us through the difficult times.  We are indebted to the NHS for saving our lives and giving us quality time in our retirement.”

The rug may soon be on display for members of the general public to view.  Plans are currently being discussed to frame the rug and put it on temporary display in Manchester Cathedral.

Starring new role for The Lowry in Salford as arts venue signs deal to...