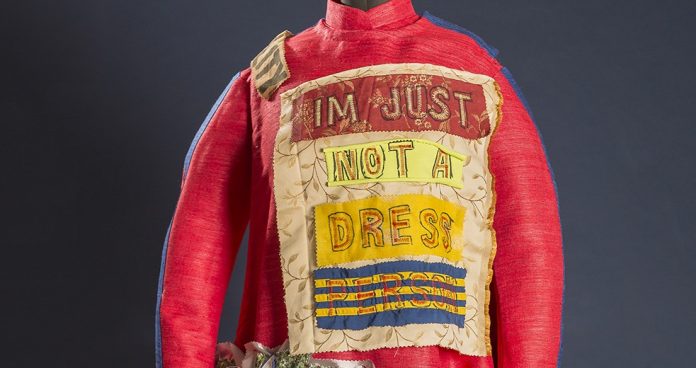 A modern reimagining of a 19th century ‘model dress’ that a Manchester art gallery put on display in an attempt to influence women’s “habits and character” has been created by a fashion lecturer.

‘DRESS: an exhibition exploring what we wear and why we wear it’ featured a reproduction of the dress by Senior Lecturer Georgina Housley from Manchester Fashion Institute at Manchester Metropolitan University, as well as responses to the story by young women from Wythenshawe as to the pressures they still feel to dress in a certain way.

In 1887, the Ancoats Art Museum put its Model Dress on display to inspire working women to wear more functional and beautiful clothing and to influence their behaviour and moral character.

The Ancoats Art Gallery Guide, now in the Manchester Art Gallery archives said it was a “great pity that that majority of English women wear dresses which have no beauty of form or of colour”.

It continued: “It is a great pity because a moderate amount of pride in being well dressed tends to have a good influence on women’s habits and character and because a beautiful dress is a good lesson in design and use of colour to all who see it.”

The museum even offered the dress pattern for sale for tuppence.

After a group of women from the Ancoats Art Museum committee, including Elizabeth Gaskell’s daughter Julia, asked to try out the dress for themselves, they politely fed back that it was “inconvenient”.

Dr Brownbridge, Senior Lecturer in Fashion Design, said: “The idea that this dress was put on display by a man, to ‘inspire women to wear more beautiful and functional clothing’ which would ‘influence their behaviour and moral character’ sounds so alien to contemporary sensibilities, yet change the language and context and these themes are actually still so relevant.”