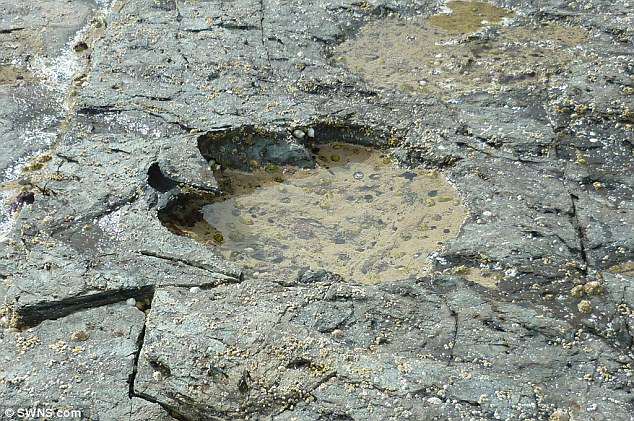 Dozens of giant footprints discovered on a Scottish island are helping shed light on an important period in dinosaur evolution.

Scientists from the University of Edinburgh have discovered close to 50 footprints on the Isle of Skye left behind by the world’s largest dinosaurs.

The tracks were made some 170 million years ago, in a muddy, shallow lagoon in what is now the north-east coast of the Isle .

Most of the prints were made by long-necked sauropods – which stood up to two metres tall – and by similarly sized theropods, which were the older cousins of Tyrannosaurus rex.

The find is globally important as it is rare evidence of the Middle Jurassic period, from which few fossil sites have been found around the world.

The footprints were difficult to study owing to tidal conditions, the impact of weathering and changes to the landscape. In spite of this, scientists identified two trackways in addition to many isolated foot prints.

Researchers used drone photographs to make a map of the site. Additional images were collected using a paired set of cameras and tailored software to help model the prints.

Analysis of the clearest prints – including the overall shape of the track outline, the shape and orientation of the toes, and the presence of claws – enabled scientists to ascribe them to sauropods and theropods.

The study, carried out by the University of Edinburgh, Staffin Museum and Chinese Academy of Sciences, was published in the Scottish Journal of Geology.

It was supported by a grant from the National Geographic Society, and subsidiary funding from the Association of Women Geologists, Derek and Maureen Moss, Edinburgh Zoo and Edinburgh Geological Society.

Paige dePolo, who led the study, conducted the research while an inaugural student in the University’s Research Master’s degree programme in palaeontology and geobiology.