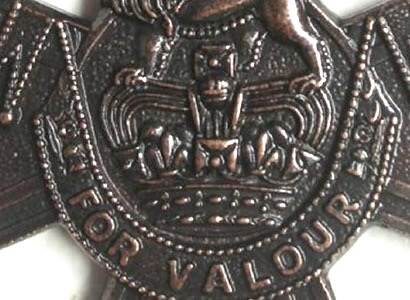 The bravery of a Wigan soldier awarded the Victoria Cross in World War 1 is to be remembered by the naming of a street in his honour.

Lieutenant-Colonel John Elisha Grimshaw VC was awarded the Victoria Cross, the highest military decoration, for his actions during the landing of Gallipoli on 25 April 1915.

The new street ‘Grimshaw Park’ will serve a new small housing development off Warrington Road, Abram – close to where Lt-Col Grimshaw was born.

In total all four World War 1 VC winners from Wigan Borough will have streets named after them by the end of the project.

A ceremony to unveil the street signs will be held on Friday 27th March and will be attended by members of Lt-Col Grimshaw’s family and representatives of his regiment the Royal Regiment of Fusiliers.

His granddaughter Joan Ure, who lives in Suffolk, said: “I was delighted to hear that Wigan Council were to name a street after my late grandfather.

“In many ways he was a most unlikely hero and certainly he didn’t consider that he had been particularly brave.

“He retained a strong Lancashire accent all his life and lived a quiet life with his wife Maggie.

“He was a very young recruit during the Gallipoli conflict. In later years I think that he reflected on the huge loss of so many young lives and it did cause him some sense of sadness.”

Lt Colonel Grimshaw was born in Abram in 1893. He was a miner at Wigan Collliery before enlisting into the Lancashire Fusiliers aged 19. He was 22-years-old and a Lance-Corporal signaller when he took part in the Gallipoli landings in World War I.

As a signaller his job during the landings was to maintain contact between the units on the ground and the leading officers on board a ship off the coast.

The British troops were met with very heavy fire and 533 died out of 950 who attempted to land.

Lt Col Grimshaw’s pack and water bottle were riddled by bullets and his cap badge was smashed by a bullet but miraculously he was unharmed. He remained calm and cheerful throughout the ordeal and frequently braved close range enemy fire to get his signals through.

He played a crucial role in the landings being successful and the cliffs on the beach were gained.

Grimshaw’s own account stated: “In boats we got within 200 or 300 yards from the shore when the Turks opened a terrible fire. Sailors were shot dead at their oars. With rifles held over our heads we struggled through the barbed wire in the water to the beach and fought a way to the foot of the cliffs leaving the biggest part of our men dead and wounded.”

Six men were nominated for the Victoria Cross for their endeavours at Gallipolli but the rules at the time did not allow for this to happen and only three were awarded with Lt Col Grimshaw receiving the Distinguished Conduct Medal instead.