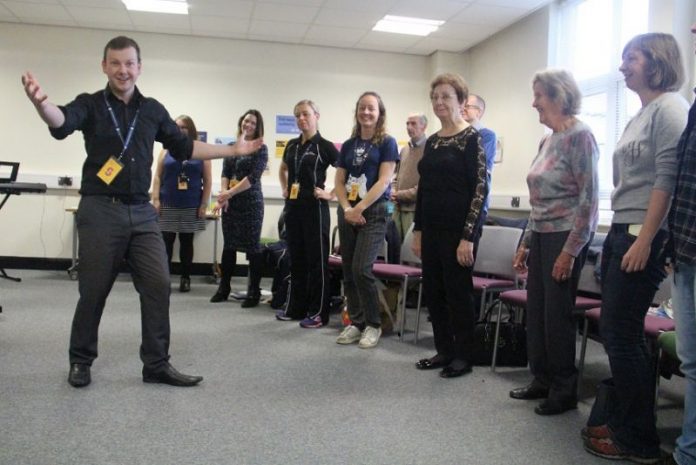 UNLEASHING the human voice can help us banish the blues, according to a community-based research experiment in Salford.

Singers from the Eccles Daytime Choir were scrutinised for a 12-week period to see how their musical endeavours could improve their wellbeing.

Dr Gary Kerr, a genetic biologist at the University of Salford, said: “The benefits of group singing are huge. Like being in a local football squad, community choir members benefit physically, mentally, socially and even spiritually from their team activity.” He explains that singing can stimulate feel-good hormones and decrease stress-hormones, creating a physical “high” after their training.

“Endorphins are released when singing in a choir because choral singing is in itself a physical workout. The deep breaths taken as part of singing equate to aerobic exercise, and can ease asthma and aid people with breathing problems.

Dr Kerr also points to a second hormone – oxytocin – known to increase feelings of affection and bonding –being released during group singing, while the hormone ‘cortisol’ related to stress is lowered after just an hour of singing. Low levels of cortisol can boost the immune system, fight off infections, and may even protect the body from cancer.

The choir which meets weekly at Eccles Gateway and comprises 11 women and 1 man, is being observed by health professionals looking at everything from social benefits and spiritual upliftment to issues around social isolation and loneliness, given that half a million older people in the UK go for a week at a time without seeing or speaking to anyone.

The idea caught the eye of Manchester Science Festival which supported the project.

Andrea Bushell, principal arts development officer at Salford Community Leisure, who helped put the choir together, said: “Some of the group already have an active social life and are in good health, whilst others have come along to make new friends, enjoy singing as a bit of light exercise or for health improvement.

“We welcome people of all singing abilities and encourage people who might not think they can sing to give it a try and enjoy the benefits for themselves. Whatever the reason for being part of it, one thing is for sure, the research suggests people feel happier by taking part in the choir.”

Alison Peden, 56, joined the group to socialise and to expand her lung capacity and says it has lifted her mood and improved her physical health. “Before I’d never done any kind of singing but being part of a community choir is really fun,” she said.

Left behind’ areas receive less than half the charitable grants of other deprived places,...