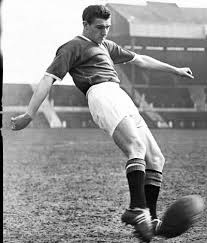 This morning Manchester United confirmed the sad news that Bill Foulkes, former team captain and survivor of the 1958 Munich Air Disaster has died at the age of 81.

The legendary centre back joined the club in 1950 and made his United debut two years later against Liverpool. Foulkes went on to make 688 appearances for the club during 18 seasons at Old Trafford.

Renowned as a rock-solid pillar of some of United’s most successful teams under Sir Matt Busby, Foulkes was a four-time league champion, FA Cup winner and European Cup winner.

Executive vice-chairman Ed Woodward expressed his and the club’s sadness at the news, saying: “Bill was a giant character in the post-war history of Manchester United. He was a very gentle man, who I was privileged to meet on several occasions, including most memorably with his team-mates at the Champions League final in Moscow, 50 years after his heroics in the Munich air crash.

Eight United players and three club officials died, along with eight football journalists, two of the crew of the chartered British European Airways Elizabethan aircraft, a United supporter and a Yugoslav travel agent on what was the third attempt to take off after a refuelling stop in Bavaria on the way home from Belgrade, where Sir Matt Busby’s team had overcome Red Star on aggregate to reach a European Cup semi-final.

Foulkes’s story from the crash almost defies belief as he found himself strapped to his seat and staring into a void after the plane had split at his feet.He wandered off into the dark for some 50 yards until he turned and saw the team’s bloodied goalkeeper, Gregg, carrying a baby, still alive. Foulkes returned to see if he, too, could help.When a Volkswagen van arrived on the scene, Gregg and Foulkes took up the offer to jump in but the shock of what had happened overcame Foulkes. Sufferiing a flashback as the van sped away down the runway, Foulkes berated and then hit the driver as he urged him to slow down.

The son of an England Rugby League international, he worked as a miner in Lea Green Colliery in St Helens whilst at the same time training with United.

In October 1992, he auctioned mementoes of his career at Christie’s as he needed the money. Twenty items were auctioned, including all his medals were raising almost £35,000.His European Cup medal raised £11,000. It now sits in the Old Trafford Museum and the number 5 jersey he wore at Wembley in 1968 in the European Cup Final raised £1,800.

After retiring after twenty three years at the club he went on to manage in America and Norway and was a co-founder of the clubs ex player association.

Bring it on UEFA