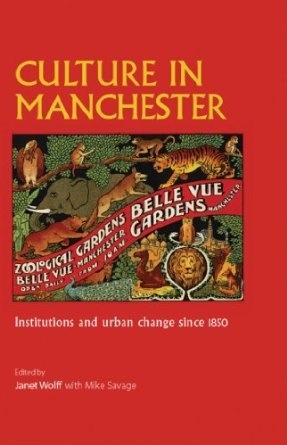 A new book that is out this week brings together studies of cultural institutions in Manchester from 1850 to the present day, giving an unprecedented account of the city’s cultural evolution.

The book, Culture in Manchester: Institutions and Urban Change since 1850 is published by Manchester University Press and brings to light the remarkable range of Manchester’s contribution to modern cultural life, including the role of art education, popular theatre, religion, pleasure gardens, clubs and societies.

The chapters show the resilience and creativity of Manchester’s cultural institutions since 1850, challenging any simple narrative of urban decline following the erosion of Lancashire’s industrial base, at the same time illustrating the range of activities across the social classes.

This book will appeal to everyone interested in the cultural life of the city of Manchester, including cultural historians, sociologists and urban geographers, as well as general readers with interests in the city. It is written by leading international authorities, including Viv Gardner, Stephen Milner, Mike Savage, Bill Williams and Janet Wolff.