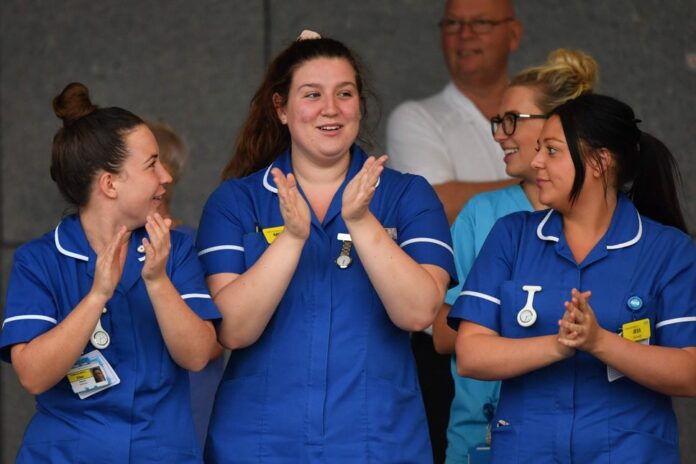 Boris Johnson has been urged to open the government’s wallet and give NHS staff a substantial pay rise to make up for a decade of pay austerity and in recognition of their role in the continuing battle against Covid-19.

Unite general secretary Len McCluskey has written to the prime minister to highlight the union’s demand for an early and significant pay rise for NHS workers of £3,000-a-year or 15 per cent, whichever is the greater.

The three-year NHS pay deal ends in April 2021, and health and social care secretary Matt Hancock has asked the NHS Pay Review Body (PRB) to report early next May on the award for 2021/2022.

The PRB will be making its deliberations against a background of chancellor’s Rishi Sunak’s ‘divide and rule’ tactics on public sector pay when millions, such as teaching assistants, will be subject to a pay freeze, while NHS staff can expect an increase.

Unite, which has 100,000 members in the health service, called for the pay deal to be brought forward to compensate for the 19 per cent pay decrease in real terms for many NHS staff since 2010.

It is estimated that more than 620 NHS and social care staff have died during the pandemic.

In his letter to the prime minister, Len McCluskey said: “To hear the chancellor announce that NHS workers will receive a pay rise on one hand and on the other hand announce pay freezes for other public sector workers that are helping in the fight against pandemic is insulting and shows how much the government really values key public sector workers.

“They are exhausted as they continue to serve during the second wave of the pandemic and as the most challenging of winter seasons approaches. Many NHS workers are struggling with their mental health, having battled to save people’s lives and we must not forget, 600 of our number have died of Covid-19.

“Please do whatever you can do in your power to expedite the NHS pay review process, so NHS workers will not have to wait for months. I also ask for the reversal of the pay freeze for all the other public sector workers without delay.

“If the Scottish Government can commit to early pay discussions and to back date pay for NHS staff to December 2020, what stops the UK government making such a commitment?”

Commenting on the letter to Boris Johnson, Unite national officer for health Colenzo Jarrett-Thorpe said: “Boris Johnson needs to open the government’s wallet and truly recognise the magnificent contribution NHS staff have, are and continue to make to keep us safe in dangerous and worrying times – the public will expect nothing less from the prime minister.

“It was only nine months ago that he was praising NHS staff to the hilt for saving his life – now is the time for him to translate warm words into a healthy pay rise.”

Pete Shelley plaque to have permanent place in hometown