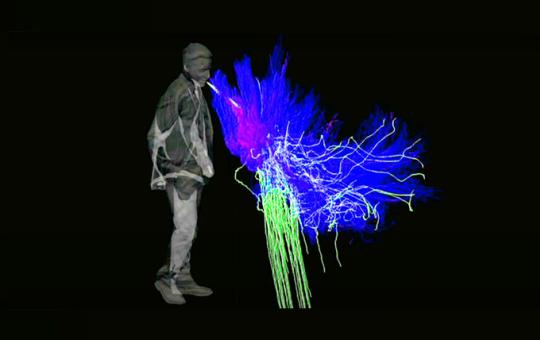 A new study has shown that the airborne transmission of COVID-19 is highly random and suggests that the two-metre rule was a number chosen from a risk ‘continuum’, rather than any concrete measurement of safety.

A team of engineers from the University of Cambridge used computer modelling to quantify how droplets spread when people cough. They found that in the absence of masks, a person with COVID-19 can infect another person at a two-metre distance, even when outdoors.

The team also found that individual coughs vary widely, and that the ‘safe’ distance could have been set at anywhere between one to three or more metres, depending on the risk tolerance of a given public health authority.

The results, published in the journal Physics of Fluids, suggest that social distancing is not an effective mitigation measure on its own, and underline the continued importance of vaccination, ventilation and masks as we head into the winter months in the northern hemisphere.

Despite the focus on hand-washing and surface cleaning in the early days of the pandemic, it’s been clear for nearly two years that COVID-19 spreads through airborne transmission. Infected people can spread the virus through coughing, speaking or even breathing, when they expel larger droplets that eventually settle or smaller aerosols that may float in the air.

“I remember hearing lots about how COVID-19 was spreading via door handles in early 2020, and I thought to myself if that were the case, then the virus must leave an infected person and land on the surface or disperse in the air through fluid mechanical processes,” said Professor Epaminondas Mastorakos from Cambridge’s Department of Engineering, who led the research.

Mastorakos is an expert in fluid mechanics: the way that fluids, including exhaled breath, behave in different environments. Over the course of the pandemic, he and his colleagues have developed various models for how COVID-19 spreads.

“One part of the way that this disease spreads is virology: how much virus you have in your body, how many viral particles you expel when you speak or cough,” said first author Dr Shrey Trivedi, also from the Department of Engineering. “But another part of it is fluid mechanics: what happens to the droplets once they’re expelled, which is where we come in. As fluid mechanics specialists, we’re like the bridge from virology of the emitter to the virology of the receiver and we can help with risk assessment.”

In the current study, the Cambridge researchers set out to ‘measure’ this bridge through a series of simulations. For example, if a person coughed and emitted a thousand droplets, how many would reach another person in the same room, and how large would these droplets be, as a function of time and space?

The simulations used refined computational models solving the equations for turbulent flow, together with detailed descriptions of droplet motion and evaporation.

The researchers found that there isn’t a sharp cut-off once the droplets spread beyond two metres. When a person coughs and isn’t wearing a mask, most of the larger droplets will fall on nearby surfaces. However, smaller droplets, suspended in the air, can quickly and easily spread well beyond two metres. How far and how quickly these aerosols spread will depend on the quality of ventilation in the room.

In addition to the variables surrounding mask-wearing and ventilation, there is also a high degree of variability in individual coughs. “Each time we cough, we may emit a different amount of liquid, so if a person is infected with COVID-19, they could be emitting lots of virus particles or very few, and because of the turbulence they spread differently for every cough,” said Trivedi.

“Even if I expel the same number of droplets every time I cough, because the flow is turbulent, there are fluctuations,” said Mastorakos. “If I’m coughing, fluctuations in velocity, temperature and humidity mean that the amount someone gets at the two-metre mark can be very different each time.”

The researchers say that while the two-metre rule is an effective and easy-to-remember message for the public, it isn’t a mark of safety, given the large number of variables associated with an airborne virus. Vaccination, ventilation and masks – while not 100% effective – are vital for containing the virus.

“We’re all desperate to see the back of this pandemic, but we strongly recommend that people keep wearing masks in indoor spaces such as offices, classrooms and shops,” said Mastorakos. “There’s no good reason to expose yourself to this risk as long as the virus is with us.”

Bedbugs evolved more than 100 million years ago – and walked the earth with...