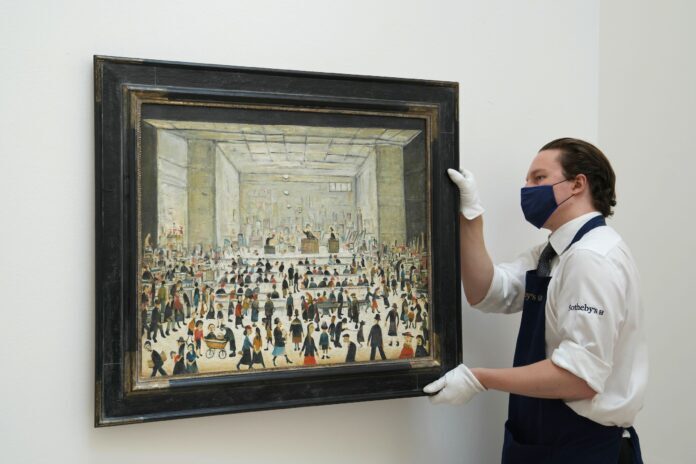 A Lowry pianting offered for auction for the first time has sold for £2.6 million at Sotheby’s this week.

The painting exceeded its pre-sale estimate of £1.2-1.8 million, as part of Sotheby’s ongoing Modern British Art auction in London.

The painting, once exhibited at Manchester Art Gallery, was acquired by the present owners over two decades ago.

It was exhibited at Lowry’s landmark retrospective at the Royal Academy in 1976 and was last shown at AMNUA in Nanjing in China in 2014.

Lowry only ever painted a small handful of interior scenes – intimate family groups, a doctor’s surgery, an election rally and an outpatients’ hall – in each instance choosing subjects that resonated with him.

As early as the 1920s, Lowry touched on the subject of auctions with a drawing titled Selling Up the Old Antiques Shop. Another painting, Jackson’s Auction and Saleroom from 1952, depicts the exterior of the auction house in Manchester, with furniture amassed outside.

In The Auction, this longstanding interest comes to its apex, and the viewer is shown the full glory of a sale in action for the first and only time. Paintings are stacked high and cabinets are busy being viewed, and through the hustle and bustle and rows of attendees, the auctioneer is elevated and about to seal the sale – a moment that would cause emotions from joy to disappointment for the buyer, underbidder or seller. There is a distinct sense of drama unfolding on a stage, which no doubt appealed to Lowry, who enjoyed many visits to the theatre.

Surveying the boisterous scene gives an insight into how auctions have evolved over time. From the mid-20th century onwards, the high-profile sales of prestigious collections became increasingly social events – host to a rich cast of characters that would no doubt have intrigued Lowry as a great British chronicler of contemporary life.

Frances Christie, Deputy Chairman of Sotheby’s UK & Ireland, said: “There can be few paintings more apt for auction than Lowry’s own auction scene, a work that captures the buzz of an auction in a manner that only Lowry, with his distinctive iconography, could.