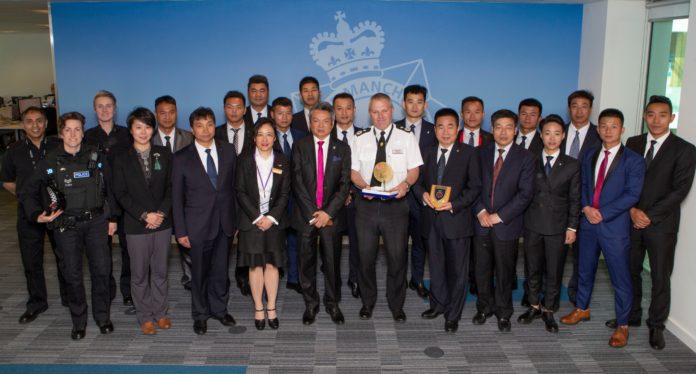 Fifteen police officers from the City of Wuhan Police in China, paid a visit to GMP to find out first-hand about policing in Greater Manchester.

The Consulate General held a welcome party on Saturday for the visiting officers as well as members of the GMP local neighbourhood team for Chinatown and the GMP Dragon Boat Racing team.

After sizing up the competition at the welcome party, both the GMP and Wuhan Police teams took part in the Dragon Boat Festival on Sunday 2nd June at Salford Quays which was beamed live back to millions of viewers in China by China Central Television . The competition has been won by team GMP for a number of years and after a hard fought race the Wuhan Team were victorious with GMP in second place.

The Wuhan Team were invited to Force HQ  where they heard inputs on UK policing, GMP neighbourhood policing and how we police large events.

Manchester and Wuhan have been twinned cities since 1986, and the visit was an opportunity to enhance our relationship with our Chinese counterparts and promote law enforcement cooperation between the two cities.

The City of Wuhan Police has 18,000, consisting of 25 divisions and 16 sub-bureaus and 248 police stations. Their training facility is also base for the Chinese national public security police training and the China-EU police training.

Consulate General Zheng Xiyaun who was instrumental to the visit commented- “Thanks to the meticulous arrangement made by GMP over the past months, Wuhan police delegation’s visit was made a great success. Their visit has started a new chapter in Manchester-Wuhan policing cooperation and will be highly conducive to cementing the sister relationship between the two cities for the benefit of both citizens.”

Chief Constable Ian Hopkins said: “As officers, our duty in tackling crime relies heavily on partnership work, so this visit by the Wuhan Team, who travelled all the way from China, was a great opportunity to share ideas between forces.

“GMP took the opportunity to gain insight and build on our engagement with the local Chinese community in Chinatown and students at the universities.

“I was honoured to be invited to the Dragon Boat Festival, which was a fantastic event and even though GMP didn’t win this year, congratulations must go to the winning Wuhan Team.

“I look forward to working closely with the team in China and continuing to build on our relationship with Wuhan Police.”

Plans to build a new Oldham Coliseum are scrapped