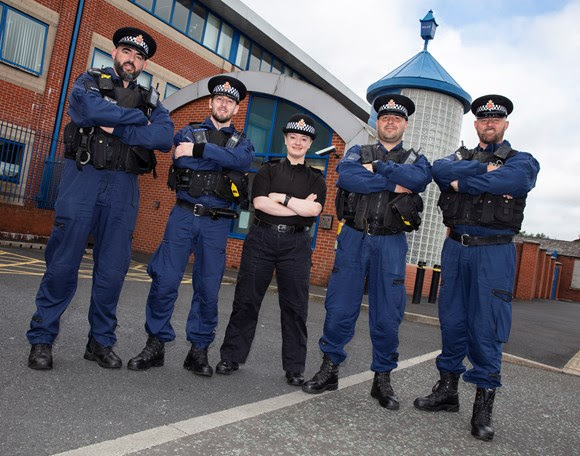 Back on 1 March, police were called to Eagley Brook in Bolton, due to reports of a concern for welfare for a woman.

Officers attended and found a woman, who had previously been reported missing a couple of days before, was submerged in water, stuck in deep mud. Two officers – PC Golding and PC Burrows immediately went to the woman’s rescue, negotiating a deep embankment in order to reach her.

Two other officers at the scene – PC Rourke, PC Ashcroft and PC Atkinson, got into position at the edge of the embankment and helped lift the woman out of the cold water and onto the bank where she could receive first aid from North West Ambulance Service (NWAS) paramedics.

Because of the remote location, colleagues from Greater Manchester Fire and Rescue (GMFRS) helped paramedics to get the woman out of the woodland, where she was then taken to hospital to receive treatment.

All of the officers involved recently received a divisional commander’s ‘good work minute’ for their handling of the incident.

Superintendent Steph Parker, GMP’s divisional commander for Bolton, said: “Ensuring the public’s safety is our number one priority and I am proud that our officers quick-thinking and teamwork resulted in saving the woman from danger.

“All of them showed professionalism, motivation and dedication and without their response, the situation could have ended very differently. Fortunately, the woman is now safe and receiving the treatment she needs.

“I would also like to thank our emergency service colleagues, for their part in the effort to get the woman to the hospital and get her the treatment she needs, as well as the member of the public who reported her in the water.”