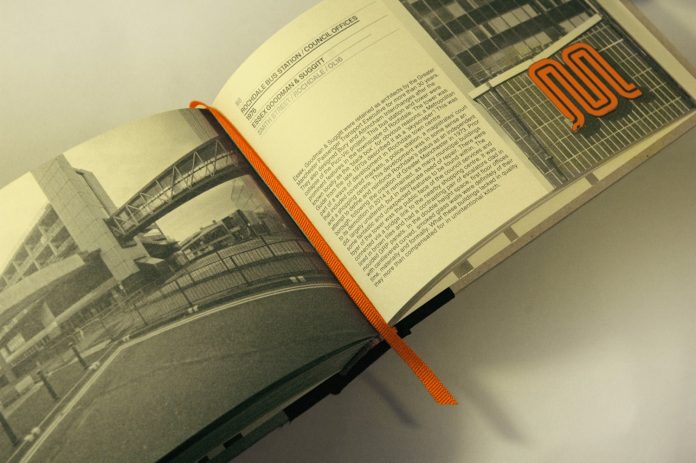 Manchester MODERN, a book 20 years in the making, is finally ready to be launched after a painstaking design process, which has at times left Modernist Society founders, Jack Hale and Eddy Rhead, wondering if the it would ever see the light of day.

At the end of last year, the Modernists smashed their crowdfunding target to produce the book, not least because of the high profile support of their patron Johnny Marr and so Manchester MODERN, by Richard Brook of the Manchester School of Architecture – one of the region’s champions of modern architecture, was finally able to go into production.

The book was expected to be ready for launch in March but thanks to the desire for perfectionism that artist and designer Vaseem Bhatti brings to every project things didn’t exactly go to plan.

Bhatti, a renowned artist, is well known for defining the distinctive visual identity of Warp Records’ Lex Records and Manchester’s Skam Records. Like Richard, Bhatti would not compromise on his vision for the book. The project had already been on ice for about 7 years as publishers laughed the pair out of their offices when they proposed a concrete cover.

Amongst the many hold ups was Bhatti’s sourcing of 8 different orange ribbons for the page marker, before settling on the right orange and the right texture. He subsequently hand singed the edge of every individual ribbon, hand numbered every single copy and checked every page for production errors. A further delay was caused by the discovery of asbestos at the bookbinders resulting in a full factory shutdown. While the book has been in production, some buildings in the collection have been demolished, including Rochdale Bus Station. However, Bhatti managed to retrieve some material from the site and had ground it into the limited edition concrete cover version of the book.

The long overdue launch event will take place at LEAF on Portland Street on 12 October 2017 from 6.00 – 9.00pm. Masses of print proofs, photos, sketches and mock-ups will be on display to unfold every aspect of the production and design process. Even the music will have a concrete-theme, with the social following the Q&A featuring musique concrète, kindly provided by Conor Thomas of Boomkat.

Comments Jack on finally having a launch date: “We were beginning to wonder if Manchester MODERN would ever be ready for launch. Richard has dedicated much of his spare time over the 20 years researching and photographing this book and so we wanted to make sure the design did him justice. I think we can safely say after the stressful few months we’ve just had that the end result will definitely be worth it.”

Richard wants his book to be remembered: “I got my hands on a lovely little architecture guidebook to Manchester by Dennis Sharp from 1969 and it has been my aim ever since to make something as memorable and enduring. I think that the amount of mileage, time and 35mm film I put into the project has been more than matched by Bhatti’s attention to detail – it’s a great object.”

The launch event, which is free to attend, will reveal the three editions of Manchester MODERN. These include a ‘concrete deluxe’ collectors’ edition, a PVC covered edition as well as the standard cardboard edition. The event will commence with a Q&A with author Richard, designer Bhatti and publisher the Modernist Society, on the genesis and design of Manchester MODERN.

The project is partly supported by the Heritage Lottery Fund (HLF) which awarded a grant of £9,800 towards three publications and support and training for volunteer contributors.