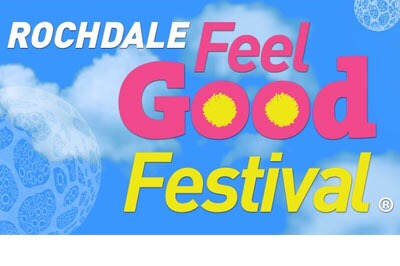 ​Rochdale Feel Good Festival returns on Friday and it’s not just about the stellar music – there’s a tasty line-up of food and drink too.
The festival’s food and drink village will be open from 10am – 6.30pm on both days with a new layout and stalls selling gifts and treats for all the family, plus delicacies from around the world.

These include Spanish tapas, Italian, Chinese, Jamaican, African and Polish food. There’ll be handmade beefburgers, pancakes, chutneys and cheese on sale, as well as a delicatessen, Spanish doughnuts, homemade fudge and cupcakes.

There will also be plenty of conveniently-located bars with alcoholic and soft drinks available. Chris Bavin, presenter of BBC1’s ‘Eat Well for Less’ series and Indian curry chef Nisha Katona will be among 6 chefs cooking on the festivals food stage.

Chris Bavin will be cooking on Saturday (20 August) at 1.30pm and 4.30pm. He ran his green grocer business, ‘The Naked Grocer,’ before his television career took off and he’s just finished filming a new series of ‘Eat Well for Less’ with Gregg Wallace and Lucy Jones, which sees them helping families and proving good food doesn’t have to cost the earth. The programme is nominated for Best Food Show at the 2016 TV Choice Awards and the first book from the hit series has just been published. He’ll be signing copies at 2.20pm and 5.20pm.

On Friday (19 August) at 3pm and 4pm Indian curry chef Nisha Katona will be sharing her quick and easy dishes. The food writer, curry evangelist, teacher and owner of Manchester restaurant Mowgli gave up her career as a barrister to focus on her passion for Indian food. Famous for creating simple dishes, a million miles away from the curry stereotype, her recipes are healthy, often vegan and packed with fresh flavour. She promises authentic Indian dishes in 20 minutes using just three spices. Her book – ‘Pimp my Rice’ was published in 2015 and she’ll be signing copies at 2.30pm and 4.45pm.

BBC Fusion Chef Aazam appears for a record ninth year. The Indian food guru is a favourite at food shows across the world, including the BBC Good Food Show. Born and bred in Manchester, Aazam has a passion for his city and world cuisine.

Chinese chef and musician Guo Yue will be making his Rochdale debut. The renowned master of Chinese cookery, musician, author and restaurateur from London will bring his global cookery workshop to town on Saturday. Discovered by Peter Gabriel, Guo is a musician and chef in equal measure. Growing up in Beijing during the Cultural Revolution, he is an outstanding soloist on the flute as well as a true master of Chinese cooking! Owner of The Bamboo Flute restaurant near Regent’s Park, Guo has worked on the soundtracks of several international films, including the Oscar-winning The Last Emperor. Author of ‘Music, Food and Love: A Memoir with Recipes’ and the award-winning children’s book ‘Little Leap Forward: A Boy in Beijing’ Guo gives demonstrations all over the world, often combining them with performances on his bamboo and white jade flutes.