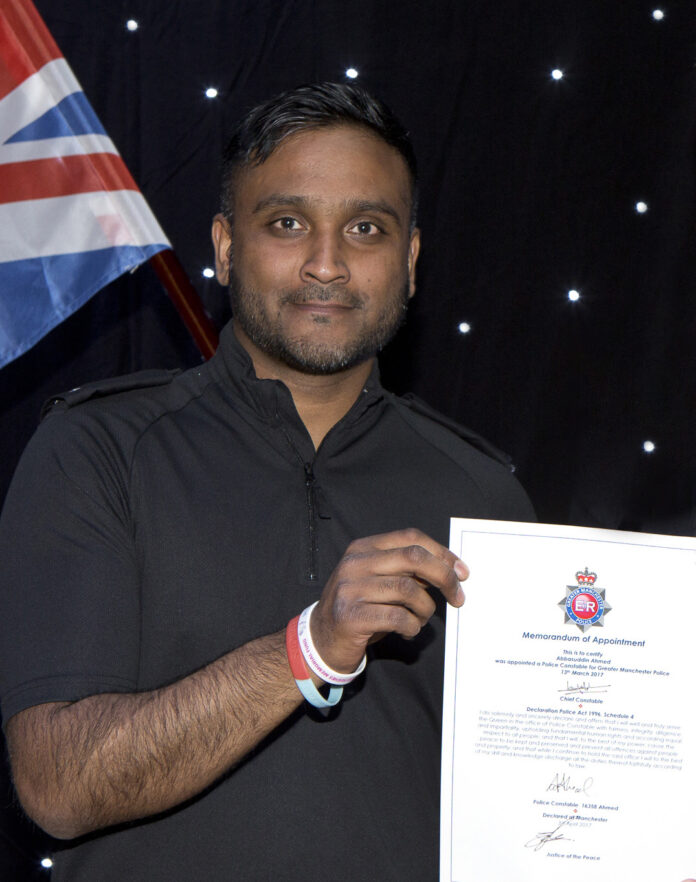 Colleagues have been paying tribute to a serving officer on the Trafford district who sadly passed away on Thursday 21 January after testing positive for COVID-19 last month.

Police Constable Abbasuddin (Abbas) Ahmed, 40, joined GMP in March 2017 and leaves behind his wife and two young children who are receiving Force support.

PC Ahmed has been described by his colleagues on the Stretford Response Team as ‘the greatest brother in and out of work’ and ‘such a lovely man who was never seen without a smile on his face.’

Officers also paid tribute to Abs’ ‘pride of being a police officer’ adding: “Abs lived up his name meaning ‘lion’ – brave, loyal, a fighter, protective, and completely fearless. Abs will live in our hearts forever.”

Inspector Abid Sardar, Co-Chair of the GMP Muslim Police Association, said: “I first met Abbas when he was transferring to GMP from the Civil Nuclear Constabulary.

“Abbas became a friend immediately and we have maintained regular contact ever since.

“I have spent time with Abbas both in a professional and personal capacity; I would describe him as a committed police officer, true friend and family man.

“Abbas will be greatly missed by everyone that knew him.”

Chief Inspector Neil Cook, of GMP’s Trafford division, said: “We are immensely saddened to have learnt of the death of PC Abbas Ahmed who sadly passed away in hospital yesterday (Thursday 21 January 2021) afternoon at the age of 40 following a battle with COVID-19.

“Abbas will be truly missed – he was a much-valued member of our Response Team on the Trafford district having joined us at GMP in 2017, and those who worked closely with him can only speak of him in the highest regard.

“Abbas had been away from frontline duties during the pandemic to look after his health but was continuing to work from home and was looking forward to returning and getting back onto the streets to continue serving the community when it was safe to do so.

“Our thoughts are with Abbas’ wife and two young children who are understandably devastated by his loss and we are giving them all the support that we can at this time.

“To see the shock and sadness of colleagues is an awful but pertinent reminder of the dangers of this terrible virus, and we remain committed to doing all that we can to protect the public and limit the number of people affected by such dreadful consequences.”

A ‘Go Fund Me’ page in memory of PC Ahmed has been set up by colleagues to support his family and a link to it can be found here: https://www.gofundme.com/f/abbas-ahmed-tribute?utm_source=customer&utm_medium=email&utm_campaign=p_cf+share-flow-1

“He was the type of person who would go out of his way to...

” We’ve seen a swallow but this is very much not a summer. Please...