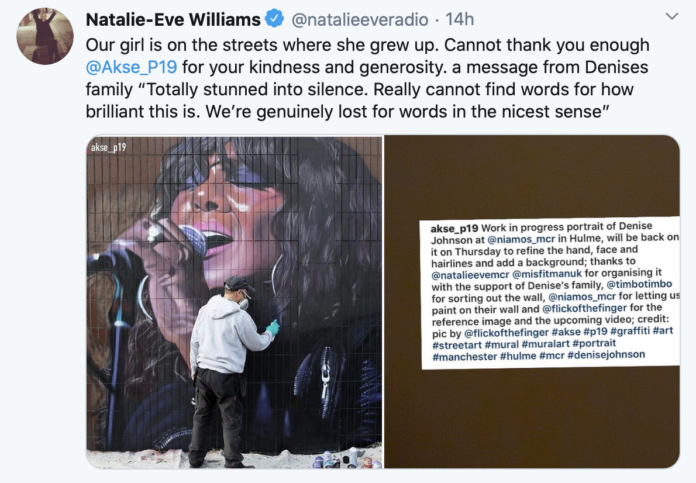 French-born Graffiti Artist, Akse has painted a tribute to Denise Johnson in Hulme, Manchester just before the release of her posthumous album ‘Where Does It Go’ this Friday.

Denise’s family said: “We’re totally stunned into silence. Really cannot find words for how brilliant this is. We’re genuinely lost for words in the nicest sense”.

BBC producer and close friend of Denise, Natalie-Eve Williams tweeted: “Our girl is on the streets where she grew up. Cannot thank you enough @Akse_P19 for your kindness and generosity”.

Akse (pronounced- Ack-seh) is a French-born Graffiti Artist of Vietnamese heritage, based in Manchester since 1997. Akse started painting in 1992 and is a member of the P19 Graffiti Crew. Over the last few years, Akse has focused on freehand High-Definition HD photo-realism graffiti portraits. His work around Manchester always commands people’s attention and often reflects the social, political and cultural mood of the city. His highly acclaimed work is featured in other cities including Liverpool and London.

Akse is regularly commissioned to produce permanent artwork for private clients and businesses, but his more high profile murals regularly appear and then disappear from the walls and hoardings around the city.