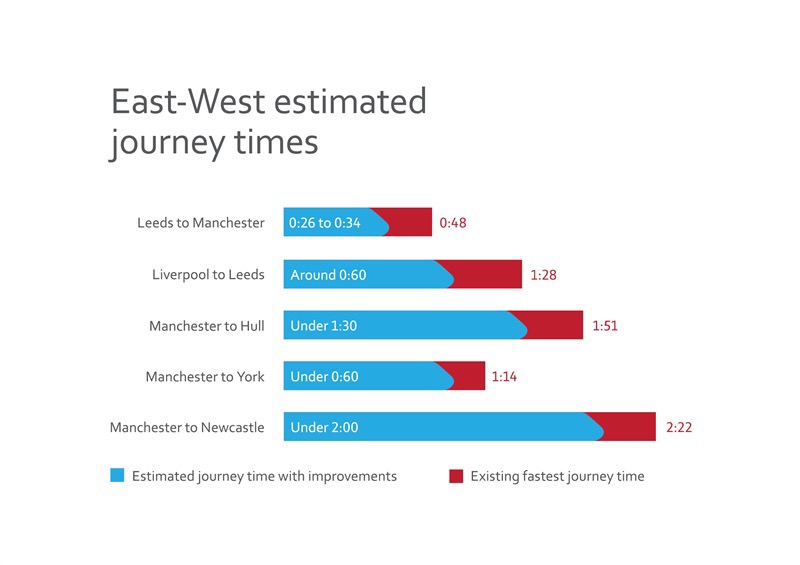 A group of MPs have said boosting east-west rail links will deliver “truly transformational” benefits to the Northern economy.

On their back of their calls, Transport Minister Andrew Jones has pledged the Government will do all it all to integrate an east-west link with the HS2 link from north to south.

“I completely recognise that Manchester Airport is thoroughly important, not just for Manchester but for the whole of the North of England with its power to connect it. I can also confirm that we are developing plans for HS3 alongside HS2; that are not separate schemes being developed in isolation. We are looking at integration of the two.”

Support for east-west connectivity – dubbed “HS3” – was given in a Westminster Hall debate, on October 11, focussing on HS2 and the benefits it will bring to the North West.

Various MPs also discussed how improved surface access will also help unlock the full potential of Manchester Airport, leading to more long haul routes being added from the gateway in the future.

Transport for the North has unveiled its vision for a Northern Powerhouse Rail network, which centres around improved east-west links.It would see journey times between the North’s key cities and Manchester Airport reduced.

“HS2 will drive growth in the North, as other Members have said, and help free up capacity. We need the extra capacity, but we also need a station at Manchester Airport. That will be critical to ensuring the benefits of the project are felt beyond Manchester as a whole, in the wider catchment areas. Any measures that help to reduce journey times and free up capacity on the existing network, enabling more places across the North to be connected to Manchester Airport will be most welcome.

“One of the most important features of HS2 and a station at Manchester Airport is the potential for wider rail network improvements. A connected network would potentially deliver truly transformational benefits for the North. Connectivity to and from Manchester Airport is a key factor for airlines when they think about introducing new long-haul routes.

“I mentioned the transformational nature of a connected network. The current journey time from Manchester Airport to Euston is two hours and 24 minutes. That will be revolutionised; it will come down to 59 minutes. If we do this right, it will open up whole new markets, from Hull to Liverpool, Chester and North Wales.

“The HS2 station at Manchester Airport will reach close to my constituency and offer substantial further scope for jobs and productivity growth. It will maximise the airport’s potential and recognise its capacity to grow and handle up to 55 million passengers per annum. Manchester Airport employs 20,000 people, many of whom live in my constituency, and contributes £1.8 billion annually to the economy. The £1 billion transformation plan to develop the airport promises more jobs and wealth creation. That hub is vital to supporting development and key to regional prosperity and delivering the Northern Powerhouse.

“One of the most important features of HS2, with a station at Manchester Airport, is the potential for it to form a wider Northern Powerhouse rail network. Such a connected network has the potential to deliver truly transformational benefits for the North. With the current rail access to Manchester Airport, the population within a two-hour catchment area using public transport stands at only 3.5 million, compared with 11 million and 12 million at Gatwick and Heathrow respectively. Manchester is the only city that can be reached by rail in 30 minutes. It is critical we get the Manchester Airport hub and that the design and delivery of HS2 works hand in hand with the design and delivery of a true east-west link across the North as part of the wider NPR network.”

They’re going but slowly does it

Teenagers who use e-cigarettes more likely to try tobacco