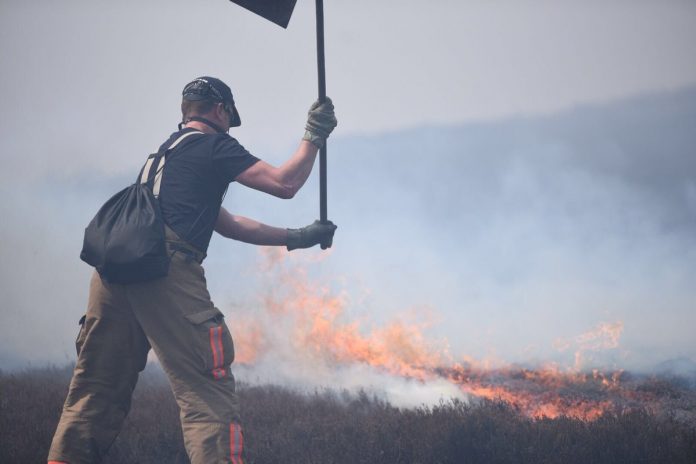 With a blaze on Saddleworth Moor raging since Sunday night, what are the implications for the wider environment?

Two scientists from the University of York,Professor Alistair Lewis from the Department of Chemistry and Dr Richard Payne from the Environment Department explain more.

Professor Alistair Lewis said: “The current moorland fires in the UK are a relatively unusual event, but in other parts of the world biomass burning can often be the single biggest cause of air pollution that some countries face. In many parts of central Africa and South East Asia, forest fires and burning agricultural waste can create extensive and long-lasting severe air pollution events that are almost impossible to control and that have very large impacts not only on public health, but also on transport systems and industrial productivity.

“The main air pollution emissions from moorland fires are the very visible particulates and smoke along with other polluting gases that arise from partial combustion, such as carbon monoxide and benzene. Whilst some of the particles produced from burning vegetation are relatively large, and will deposit to the ground under gravity, a substantial fraction will be smaller than 2.5 microns and can enter into the lungs. The particles from this kind of burning are also characteristic in that they can carry on their surfaces a range of toxic chemicals, including a class called polycyclic aromatic hydrocarbons (PAH). Reducing public exposure to these cancer-causing chemicals was one of the primary motivations behind the banning of stubble burning in the 1990s.

“The long-term effects of biomass burning can be modest, indeed many events are naturally triggered, and can be necessary to maintain balance in ecosystems. Clearly any climatic shift towards more periods of prolonged dry weather increases the risk of fires and a change in frequency; this kind of air pollution event has already been identified as one possible consequence of a changing climate.”

Dr Richard Payne said: “The UK’s peaty moorlands are crucial for the carbon they lock away as peat. Since the last ice age these peatlands have helped cool our climate but fires can reverse that effect, rapidly returning carbon to the atmosphere as carbon dioxide. Devastating events like we are seeing today at Saddleworth Moor are likely to happen more often in the future and will exacerbate future climate change”.

Coronation Street to air 10,000th episode and one resident will leave the cobbles for...

10 year old hospitalised with life changing injuries after being hit by a car...