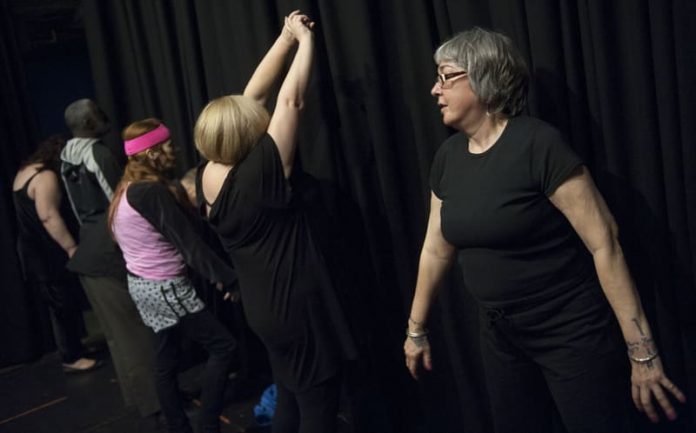 Individuals and communities at risk of social isolation are being put into the spotlight this month, as housing and community services provider One Manchester, and the Royal Exchange Theatre, work with tower block residents in Hulme and Gorton to create a unique theatrical performance which will premiere in the Exchange’s Studio Theatre.

The residents, who live in One Manchester managed tower blocks, are putting the final touches to Can You Hear Me From Up Here? a stage performance they’ve written and produced with the Royal Exchange Theatre.

Working closely with the residents the theatre helped to pinpoint individual creative talents to bring the project together, from Martina Cribbin whose writing skills have informed much of the script, to the many other residents who will be on-stage performing the piece.

The new 40-minute show is part of a three-year cultural engagement project named On Top Of The World which has been developed as a powerful creative platform on which residents who are at risk of social isolation can express their views, shed-light on their experiences and build new communities.

On Top Of The World began in 2015, with the aim of encouraging single-occupancy residents living in Manchester’s high-rise accommodation to develop new skills and get to know other residents through engaging with the creative arts.

Inga Hirst, Director of Creative Learning and Engagement at the Royal Exchange Theatre said “ On Top Of The World has been an incredibly rewarding partnership with One Manchester. They are an organisation that recognises the intrinsic value of the creative arts for both their customers and their staff. This project has not only helped individuals to increase confidence, combat loneliness and find a voice but it has helped to build communities, increase social cohesion and improve vital communication with residents. Utilising the arts, and in particular the unique practices found in theatre, has resulted in a project that has directly impacted the health and wellbeing of those residents involved from something as simple as creating a social space within the block to empowering residents to take ownership of that space, manage it and keep it running day to day. This forms an incredibly important part of the sustainability and legacy of the project.

I’m thrilled that the culmination of all of this work is Can You Hear Me From Up Here? which is an incredibly honest, moving and powerful account of life in social housing. It is inspiring.”

The new performance builds upon the success of On Top Of The World, which originally began by identifying One Manchester residents who were keen to become cultural ambassadors for the project. Their remit was to encourage their peers to participate in cultural and social events taking place in the tower block and throughout the city-region. Can You Hear Me From Up Here was created and is performed by participants of this scheme and has been inspired by their lives and experiences of living in high-rise homes.

This inspiring and moving performance has been a way for residents to explore a broad range of issues and to express concerns about prejudices and stigmas that can be associated with living in urban tower blocks. In addition to shows at the Royal Exchange, One Manchester will be staging a performance at its office in Hulme, for staff to attend. This event will help to ensure that those within the organisation are informed about the daily issues faced by their customers and the particular challenges of living alone in a tower block.

200 residents have been directly involved in the project, and it is expected to impact many more people in the local community. The participants, from Hulme and Gorton, now have a strong dialogue with One Manchester and have developed friendships in their local area.

Figures recently published by the Office of National Statistics found five percent of adults in the UK feel lonely ‘often’ or ‘always’. Social groups ‘at risk’ of social exclusion were those who do not feel like they ‘belong’ to their neighbourhoods and those who are less satisfied with their local area. Loneliness has been labelled as harmful to a person’s health as smoking 15 cigarettes a day and is thought to be a bigger threat to our national health than obesity and physical inactivity.

Speaking of the project, Dave Power, group chief executive of One Manchester said:
“Isolation and a lack of belonging can have a huge impact on people living in our communities. The wellbeing of our residents is hugely important to us and we wanted to do something different that will really have an effect on people’s lives.

“This performance gives our residents a voice and an opportunity to express themselves. Not only is it incredibly brave of them to put themselves in the spotlight and discuss matters close to their heart, but it allows us to digest everything our residents are saying. The hard work and commitment that has gone into this project is inspiring; three years ago we could never have imagined how it would evolve. We are listening to what our residents have to say and will use our reflections on this performance to shape our future work in creating resilient communities and places where people want to live.

“Our role is much more than just a landlord and we are always looking to build partnerships across the city and region that can tackle problems in a unique and creative way. The partnership with the Royal Exchange Theatre has done just that and we’re especially grateful to them for their expertise and sensitive approach towards our residents. The outcome of this performance demonstrates that the arts are inclusive and not exclusive – it’s a brilliant way to bring everyone together and share something very special.”

Tracie Daly, Royal Exchange Community Programme Leader has been the lead practitioner on the project since the beginning, she commented,

“I’ve been able to see the direct impact that a project like this has had on the people who have taken part. Over the years I’ve come to know the residents well and I have seen them become more confident, independent and active. I’ve watched friendships grow and people become more self-assured. Residents who wouldn’t have dreamt of getting up in front of others to act out a dramatic scene have thrilled and surprised me. I have watched people flourish because of this cultural engagement. What were once just housing blocks now feel like communities that grow in confidence each day. I think the evidence of this confidence can been found in Can You Hear Me From Up Here? where the residents explore and share their worries and their aspirations for their future and their homes in a really passionate and thought-provoking piece of drama. One resident said to me “I love being part of this. I feel like a somebody, not a nobody”. That’s something I’ll never forget.”

Cast announced for The Pride at Hope Mill Theatre