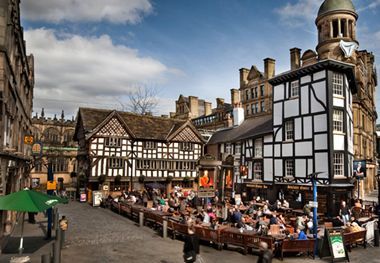 After almost a year of severe disruption for the tourism, hospitality and leisure sector, a contingent of tourism boards across the north of England came together to discuss the findings of the NatWest North of England Tourism Barometer study.

Over the last sixteen weeks the NatWest North of England Tourism Business Barometer has taken the temperature of the North’s tourism business environment including changes in employment, trends in revenue and overall business confidence.

The study commenced in mid-July when the UK was emerging out of lockdown and covered a period up to and including the introduction of the government’s three tier alert level in late October.

Led by Marketing Manchester, nine tourism boards – otherwise known as Destination Management Organisations (DMOs), including Cumbria Tourism, Marketing Cheshire, Marketing Lancashire and Marketing Liverpool from the North West – were involved and recruited businesses from within their tourism economies that consistently participated in a regular survey.

At a virtual roundtable event held on Friday 20 November, leaders from across the north came together with businesses that participated in the survey and senior economists from NatWest.

Together they analysed the journey that the north of England’s tourism, hospitality and leisure sector undertook throughout the study period, how it can learn from the study, and move forward through the challenging winter and into recovery next year.

One of several key findings across the north of England that the study revealed is that businesses have, and continue, to carry significant losses to revenue, with 31% of businesses reporting a revenue loss of over 60% even at the peak of resumed business activity in late August. This was when the visitor economy had largely reopened after the first lockdown and initiatives such as Eat Out to Help Out were having a positive impact. Overall, around half of businesses were trading at a loss of over 60% for ten out of the sixteen weeks of the study.

Businesses across the north of England have had to make significant reductions to permanent and temporary staff, and from the end of September and throughout October half of businesses reported that they were downsizing their permanent staff over the next month.

Other key findings show that: a third of businesses reported forward bookings for January to March 2021 being significantly down on where they would usually be; that business confidence in revenue recovery has shifted from July 2021 at the beginning of the study to January 2022 at the end of the study; and that overall concerns about business survival shows that 21% of businesses are unsure if they will still be trading next summer.

Commenting on the study Richard Topliss, Chairman of the NatWest Regional Board, North, said: “Tourism and the wider hospitality and leisure sector has faced and continues to endure unprecedented challenges as a result of the COVID pandemic. The tourism barometer has charted the ups and downs of businesses in the sector over the last four months and the final survey points to low confidence for the immediate future, and hence, the need for central and local government support, alongside business leaders and providers of finance, to work together to help the sector rebuild for the future when it becomes clear that widespread vaccination will permit a new normal to emerge for tourism.”

Sheona Southern, Managing Director of Marketing Manchester, said: “In Greater Manchester there are significant parts of the sector that have been closed since March and there’s no denying that Manchester – like other cities across the North – has borne the brunt of additional lockdown restrictions. The individual barometer data for Greater Manchester shows this, with the region having had the largest proportion of businesses trading with a revenue of over 75% down, as well as much lower footfall, a greater reduction to permanent staff and a more significant downfall in business on the books for January to March 2021 than we would have experienced pre-Covid-19.
“We must now get on with being as prepared as possible for recovery when restrictions permit it, and to this end we have recently launched Greater Manchester Tourism, Hospitality and Leisure Support and Recovery Plan to provide a roadmap for our sector. Alongside this DMOs need to be committed to rebuilding consumer confidence and need to deliver proactive marketing activity for both domestic and international markets to stimulate business, all the while shouting about and lobbying in support of the business events industry, sports fixtures and major events which are absolutely vital in terms of driving demand in cities such as ours.”