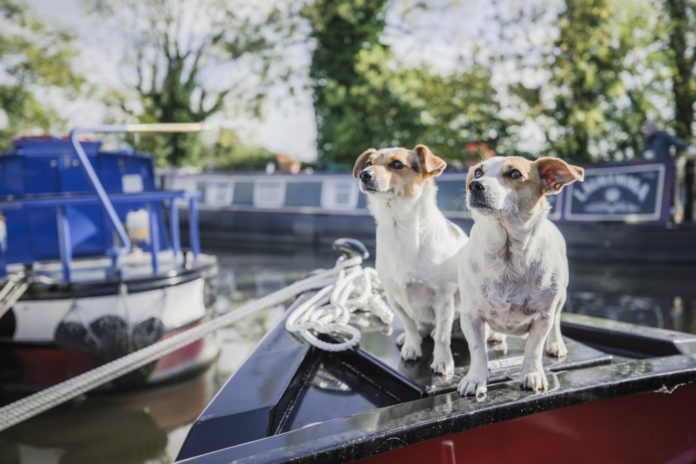 Narrowboats provide a floating holiday home so it is possible to take all sorts of pets on the canals.

Canal boat holidays are especially great for dogs, with towpath walks and dog-friendly canalside pubs to visit along the way. And over the years, Anglo Welsh has accommodated many other kinds of pets, including, cats, rabbits, hamsters, caged birds and goldfish.

First pets go free on all Anglo Welsh holidays, and a £25 supplement is charged for a second pet on a short break, £35 for a week.  Anglo Welsh is currently offering a special ‘Doggy Discount’ of £100 off all bookings made by 29 February 2020 where a dog is going to be part of the crew.

To celebrate the fact that canal boat holidays are pet-friendly, Anglo Welsh has put together its Top 10 getaways for animal lovers in 2020;

1. Cruise to the foot of the Caen Hill Flight – from Anglo Welsh’s canal boat rental base at Brassknocker Basin on the Kennet & Avon Canal just outside Bath, on a short break (three or four nights) narrowboat holiday-makers can travel to Fox Hanger Wharf, at the foot of the mighty Caen Hill flight of locks in Devizes, one of the Seven Wonders of the Waterways.

Along the way, boaters pass through miles of peaceful Wiltshire countryside, with a series of villages and dog-friendly country pubs to visit along the way, including The Cross Guns at Avoncliff, the Barge Inn at Bradford on Avon and the Barge Inn at Seend. Once at Caen Hill, boaters can moor up and explore the flight and its large side ponds, which provide a fantastic haven for wildlife. Full of fish, the side ponds provide an ideal habitat for dragonflies, butterflies and many types of waterfowl – from swans, ducks and geese, to coots, moorhens, herons and cormorants. The journey to Fox Hanger Wharf and back takes around 19 hours, passing through 16 locks (eight each way).

2. Cruise to Ellesmere for some heron spotting – from Anglo Welsh’s narrowboat hire base on the Llangollen Canal at Trevor in North Wales, on a short break (three or four nights) boaters can cruise to the Shropshire Lake District, teeming with water birds and other wildlife. The journey to the medieval market town of Ellesmere, in the heart of the Shropshire Lake District, takes around seven hours, passing through just two locks and over two magnificent aqueducts, including the famous Pontcysyllte Aqueduct.

Moscow Island on The Mere in Ellesmere is home to the Heron Watch Scheme, where cameras allow visitors to watch the birds build nests and raise chicks. Boaters on a four-night break will also have time to cruise to the pretty town of Llangollen, passing The Sun at Trevor, a traditional Welsh country pub and winner of the Rover Dog-Friendly Awards in 2019.

3. Explore the gardens and the ancient topiary at Packwood House – from Anglo Welsh’s canal boat rental base at Wootton Wawen on the Stratford Canal near Henley-in-Arden, it is a seven-mile, 31-lock and 10-hour journey to Lapworth Lock No 6, a half-mile walk from the National Trust’s beautiful Packwood House and gardens.

Packwood’s magnificent gardens boast stunning herbaceous borders, including the unusual North African Cabbage Trees, a bountiful Kitchen Garden, Memorial Orchard, wildflower meadows and the iconic Yew Garden, where according to legend, the 350-year old trees represent the ‘Sermon on the Mount’. Dogs are welcome at Packwood on leads in the car park, on public footpaths across the estate, on the café terrace and in the barnyard. The house and formal gardens are only for humans.

4. Travel around the Stourport Ring through idyllic stretches of Worcestershire countryside – on a week’s break from Anglo Welsh’s canal boat rental base at Tardebigge on the Worcester & Birmingham Canal near Bromsgrove, boaters can travel around the Stourport Ring.  This popular circuit takes boaters on an 84-mile, 114-lock journey, in around 56 cruising hours. Much of the route is rural, cruising sections of the Staffordshire & Worcestershire Canal, Worcester & Birmingham Canal Navigation, River Severn, Birmingham Canal Main Line and Stourbridge canals.

Rural highlights include Kinver Edge with its extensive woodlands and National Trust Holy Austin Rock Houses; idyllic stretches of Worcestershire countryside along the River Severn; and the dramatic flight of 30 locks at Tardebigge, climbing two-and-a-quarter miles with spectacular views of the open countryside all around.

5. Cruise along the River Thames into the Cotswolds – from Anglo Welsh’s narrowboat hire base on the River Thames at Oxford base, it is a tranquil nine-hour, seven-lock cruise west to the pretty market town of Lechlade on the edge of the Cotswolds, perfect for a four-night midweek break. Along the way, boaters travel through miles of peaceful Oxfordshire countryside, with plenty of dog walking opportunities.

Places to visit include the village of Radcot with its 800-year old bridge across the Thames, dog-friendly bar in the Ye Olde Swan Hotel and Civil War Garrison Earthworks, and Kelmscott with its Grade I listed Kelmscott Manor, once the Cotswold retreat of William Morris, and popular Plough Inn.

6. Watch out for wildlife on the Montgomery Canal – from Anglo Welsh’s canal boat rental base at Whixall Marina, on the Prees Branch of the Llangollen Canal in Shropshire, it takes around six hours to reach Frankton Junction, where the Llangollen Canal meets the Montgomery Canal. This beautiful canal, which runs for 38 miles between England and Wales, is recognised as a Special Area of Conservation, making it one of the most important sites for wildlife in Europe.

Currently only around half the Montgomery Canal is navigable, including a seven-mile section from Frankton Junction to Gronwyn Wharf. The restoration of a further section from Gronwyn Wharf to Crickheath is expected to be completed later this year.  From Whixall, the journey to Gronwyn Wharf and back takes around 20 hours, travelling through 34 miles of beautiful countryside and passing through 16 locks (eight each way). Along the way, boaters can enjoy looking out for many types of waterway birds, animals and insects, including dragonflies, damselflies, the shy nocturnal otter, Daubenton’s bats skimming over the water at dusk, and the critically endangered water vole.

7. Cruise to the historic village of Wrenbury and back – from Anglo Welsh’s canal boat hire base at Bunbury on the Shropshire Union Canal in Cheshire it takes around six hours, passing through 11 locks, to reach Wrenbury Mill on the Llangollen Canal.

The journey takes boaters along 10 miles of waterway through quintessential Cheshire farmland and countryside. The historic village of Wrenbury, which is on the South Cheshire Way offers lots of countryside walks. It’s also a registered conservation area with plenty of wildlife to watch out for, particularly in the gardens of the Grade II listed St Margaret’s Church, and there’s a choice of pubs to visit: the canalside Dusty Miller, and the Cotton Arms in the village of Wrenbury.

8. Cruise to Cannock Chase for acres of dog walking trails – on a short break from Anglo Welsh’s barge hire base on the Trent & Mersey Canal at Great Haywood in Staffordshire, canal boat holiday-makers can easily reach Cannock Chase Forest where there are miles of walking trails enjoy, as well as a dog activity trail.

Once a Royal Forest, Cannock Chase is an Area of Outstanding Natural Beauty with over 6,800 hectares of landscapes to explore. There are mixed deciduous woodlands, coniferous plantations and heathlands, which are home to a wide variety of animals and insects, including a herd of fallow deer, a number of rare and endangered birds, including migrant nightjars, as well as butterflies, bats and reptiles. The Wolseley Centre and Nature Reserve is next to the Trent & Mersey Canal at Wolseley Bridge, just two miles and two locks from Great Haywood, and offers a great gateway to Cannock Chase.

It can be done in a week, but a 10-day or two-week break gives more time for sight-seeing.  Passing through many miles of countryside, with fields and ancient meadows and the occasional sleepy village for much of its length, the route also takes boaters through the vibrant city centre waterfronts of Birmingham. Destination highlights along the way include the pretty canal village of Braunston; the awesome flight of 21 locks at Hatton; the splendid medieval Warwick Castle; and Birmingham’s Brindleyplace with its impressive National Sealife Centre.

10. See David Hockney’s Dachshunds at Saltaire – on a short break from Anglo Welsh’s canal boat hire base at Silsden on the Leeds & Liverpool in West Yorkshire, canal boat holiday-makers can reach the UNESCO World Heritage Site of Saltaire.  Founded on the banks of the Leeds & Liverpool Canal near Bradford in 1851 by Sir Titus Salt, as a place for his woollen mill to operate and works to live, today Salts Mill has a number of galleries, including the stunning David Hockney Gallery.

This beautiful exhibition space shows both permanent and temporary collections of the Bradford-born artist’s work, including prints of some of the portraits he has made of his beloved Dachshunds, Stanley and Boogie. Unfortunately, dogs are not allowed in Salts Mill so pet owners will have to take it in turns to visit.

Anglo Welsh offers over 160 canal boats for hire from 11 bases across England and Wales, with accommodation for between two and 12 people. Hirers are provided with life jackets on request and boat steering tuition as part of all its packages. 2020 boat hire prices start at £530 for a short break (three or four nights) on a boat for four people, £755 for a week.
Guide dogs go free of charge. A maximum of two pets are allowed, plus a guide dog, but all bedding and pet facilities must be provided by the owner. Owners are asked not to leave their dog unattended on board. 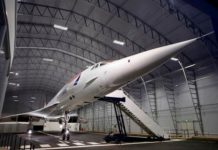 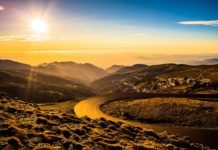 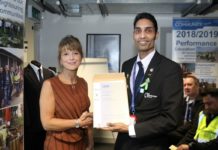 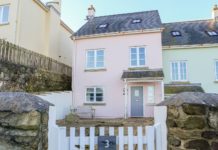 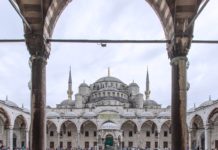 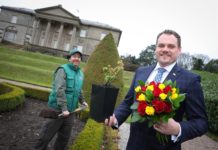 Gran Canaria, the perfect destination for a dream vacation in Europe