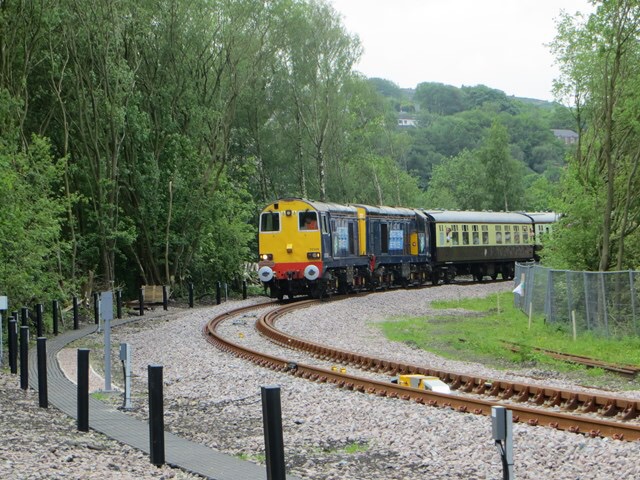 A key new section of railway in the north west of England has reopened providing a direct link between Manchester and Burnley for the first time in over 40 years.

The 300m-long Todmorden Curve was used by the first Northern Rail trains on Sunday 17 May following a £10 million investment from Burnley Borough Council, Network Rail and Lancashire County Council.

Terry Strickland, area director for Network Rail, said: “The reopened Todmorden Curve is a significant improvement to the railway in this part of the country and will allow services to run directly between Manchester Victoria and Burnley Manchester Road for the first time in decades. We have worked closely with Burnley Borough Council, Lancashire County Council and Northern Rail to make this happen and it is an excellent example of partnership working to help deliver a better railway for passengers.”

County Councillor John Fillis, Lancashire County Council cabinet member for highways and transport, said: “It is a fantastic achievement by everyone involved to re-establish the direct service from Burnley to Manchester which will extend opportunities for local people and have a real impact on the economy. It shows what can be achieved when partner organisations are clear about their priorities and work closely together to deliver them. The working relationships established will be instrumental in the ongoing transformation of rail services in East Lancashire. I look forward to the service being a great success, paving the way for better trains and faster journey times in the future.”

The first service to use the curve was Northern Rail’s 0818 from Blackburn. To celebrate the first commuter service on Monday 18 May, there was a community celebration at Burnley Manchester Road and Accrington stations to mark the historic day and the latest chapter in rail travel in the north west. Passengers were welcomed with tea, coffee and muffins.

Burnley Manchester Road is a relevant location to mark the future of local rail travel. Built in 1866 it has seen several changes in its historic past, not least its closure in 1961 and subsequent reopening to customers in 1986, complete with new platforms. It now acts as a gateway to the wider rail network and is at the heart of the new Lancashire to Manchester services.