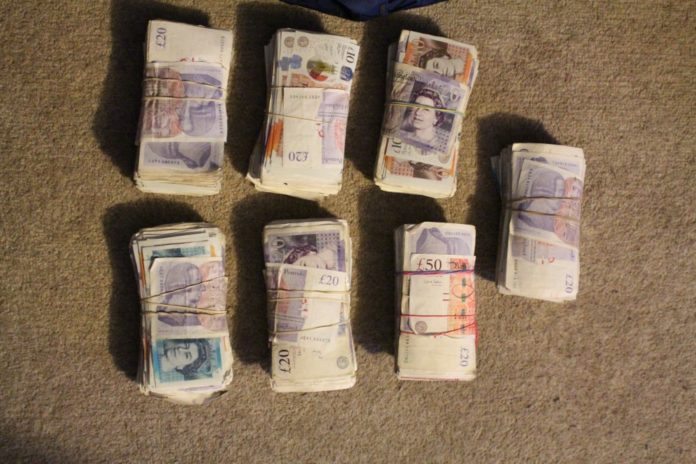 Three men have been jailed after almost £60,000 of drug money proceeds was found stashed in a sock drawer.

The three were key players who were responsible for heroin being passed around Greater Manchester.

In January 2018 and oblivious that he was under police surveillance in Longsight, Robert Smith – identified as the main courier – handed over a rucksack full of 2kg of heroin to Ramiro Orr.

Officers followed Orr for a few minutes before he tried to run away. He was arrested on New Bank Street in possession of the drug-filled rucksack.

After expert analysis, it was established the Class A package could have yielded more than £30,000.

To further add to Orr’s prosecution, along with more than £500 in his trouser pocket, he was found with £3500 worth of heroin in his coat and snap bags of cannabis and amphetamines – much more than could be argued was for personal use.

Unaware of the arrest, Travis Bailey aged 28,of Kinderlee Way, Glossop – the main man overseeing the operation – tried to call Orr six times within the space of three minutes.

Almost all of Bailey’s possessions, including his rented home, were in someone else’s name – a clear attempt to distract the authorities.

When officers gained access to his apartment in Glossop, they found an impressive hoard of designer clothes and jewellery. During the search, they found almost £57,000 in notes in a rucksack and stuffed in socks in a drawer.

Both Robert Smith aged 34 of Cromwell Avenue, Cheadle and Ramiro Orr aged 22 of Edlin Close, Manchester were produced from prison after the warrant, already serving time for drug offences, and were charged with drug offences.

They all pleaded guilty at Manchester Crown Court,Bailey was sentenced to 10 years and four months in prison.

Detective Inspector Kevin O’Regan of GMP’s Serious and Organised Crime Group, said: “Yet another group who thought they were above the law and beyond detection are where they should be, unable to cause even more harm by profiting from drug supply.

“If people are acting like these criminals in your area, all you have to do is tell us.

“With every piece of information we receive, we’re able to build a bigger intelligence picture and take the appropriate action to put people like this behind bars and make our neighbourhoods a safer place.”