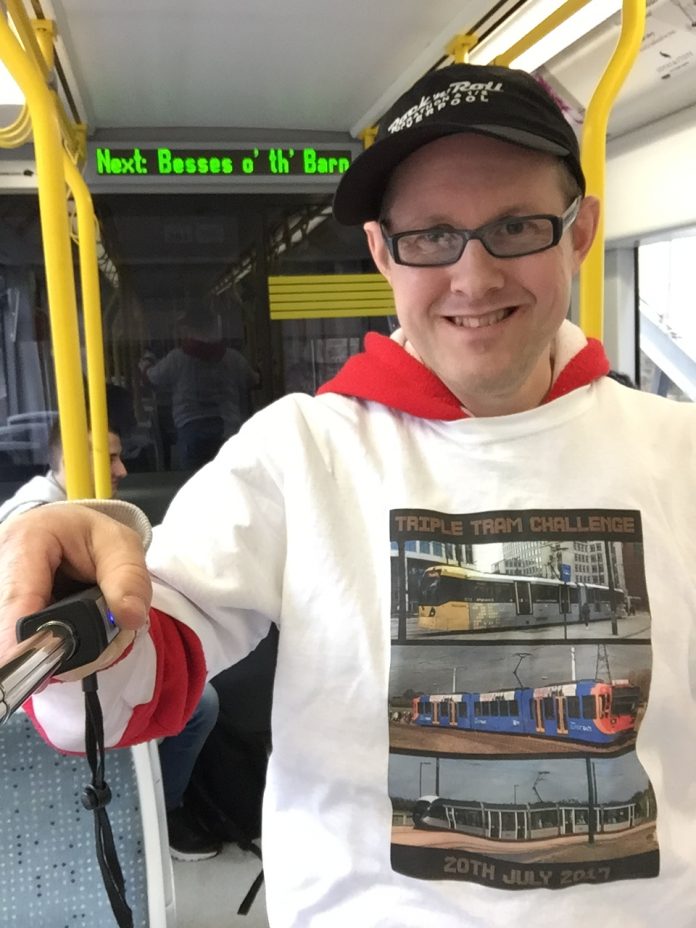 Did you know travelling the entire length of Greater Manchester’s Metrolink network takes up to eight hours? So how about travelling across three tram systems, in three cities, all in one day?

Transport enthusiast Chris set off on his light-rail voyage at 3.19am taking in all 93 stops on the vast Metrolink network in just under 11 hours

He then headed to the other side of the Pennines to travel on the South Yorkshire Supertram network, before completing his trip on the Nottingham Express Transit at 00.54.

On completing his mission, Chris said: “It’s significant that the challenge took place in the week we celebrate 25 years since Metrolink’s official opening by the Queen. I’m delighted to have been able to support this anniversary and the work of TfGM’s two corporate charities.

“I couldn’t resist the temptation to include Supertram as part of the challenge as this is where I started my transport career as a conductor.”

Mandy West, Macmillan, commented: “We absolutely love the unique ways our supporters raise funds for Macmillan and Chris’ challenge is a fantastic example of this.  At Macmillan, we know that cancer can affect everything and we are here to help people live life, no matter what. It is only through working with organisations like TfGM and the support of individuals like Chris that we can achieve this and we are so grateful for their support.”

“Dementia devastates lives, but dementia won’t win. Until the day we find a cure we will be here for anyone affected by dementia, where they are, whatever they’re going through. We need more people like Chris to join us now and unite against dementia.”