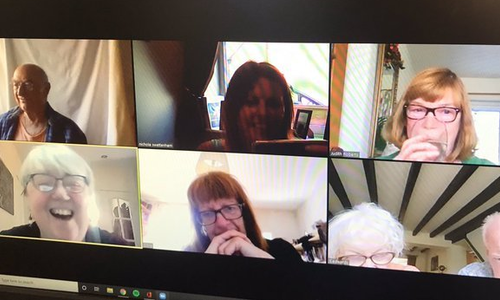 Prior to the coronavirus crisis, the Swinton Writers in’t Critchley House would meet at the Critchley Community Hub, an award-winning social centre and garden café in Swinton.

Since Government guidelines were introduced, however, the hub has been closed, so the group moved their efforts online, keeping the same day and time they used to (Wednesdays at 1.30pm) but now hold them on Zoom.

The group is led by Bill Cameron – a volunteer at Critchley for 5 years who supports IT learning groups – and has around 15 members, though this number is growing.

“Often, family obligations, careers and personal circumstances can prevent people from being creative, as they haven’t got the time as other things take priority,” explains Sue Fletcher, Assistant Chief Executive of Age UK Salford. “So having a bit more time does have its advantages. It can be an opportunity to achieve a life goal, like writing a book, in later life. This group also shifts the standard narrative that ageing is all about putting your feet up.”

Each week the group is set a task, with compositions read out to the group the following week. Earlier this month they commemorated the 250th anniversary of William Wordsworth’s birth with a poetry session.

‘I wandered lonely as a cloud,
that floats in th’hills over the brambles
and all at once I saw a crowd
a million bloody candles.’

More recently, their project was to create something to celebrate William Shakespeare’s acknowledged birthday, 23 April.

While the 40 minute time limit on Zoom means the group can’t match the amount of time the group would meet for when at Critchley, the members enjoy their chats nevertheless.

Some members of the group actually have books available in print. Judith Barrie has a novel called The Taste of Teardrops, a gripping psychological thriller set in a sleepy seaside town in the 1980s.

The other members of the group were able to read The Taste of Teardrops, as Bill recently used his daily exercise allowance to deliver copies to locals in Clifton, Roe Green, Winton and Worsley – a 2 hour round trip that naturally included chats from a safe distance.

The group has a healthy sense of competition, and have submitted a variety of their works to the competitions run by the National Association of Writers’ Group (NAWG). Entries have included Peterloo People (pictured), an anthology of short stories compiled by SWit’CH last year in recognition of the 200th anniversary of the Peterloo Massacre, a defining political moment for Manchester.

“We’re very proud of the group,” says Sue. “It’s fantastic that they enter and win competitions, as well as having their work published. They continue to enjoy writing and each week share new stories and poems.”

The blind leading the blind-