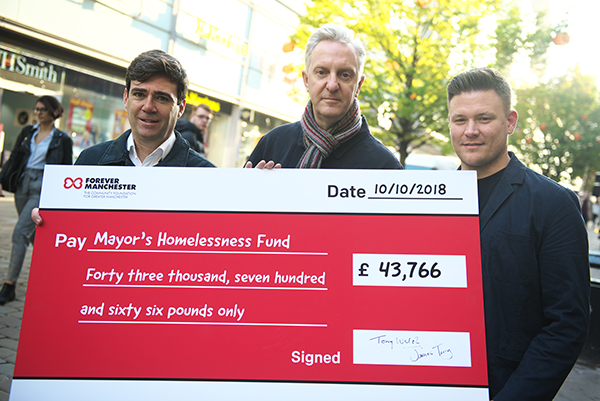 The donation was made to the Mayor’s Homelessness Fund by high-profile charity Forever Manchester from the proceeds of This is the Place, a book brought out following Manchester Arena attack to demonstrate the spirit of our city-region.

A third of cash raised through sales of the iconic yellow book was pledged to the Fund.

The £43,766 raised will contribute to A Bed Every Night, Mayor of Greater Manchester Andy Burnham’s landmark campaign to provide every person sleeping rough in the city-region a bed for every night of the coming winter.

Performance poet, and This is the Place curator, Tony Walsh, and James Torry from Monsall-based Doodledo Motion – the driving force behind the book – presented Andy with the cheque to mark World Homelessness Day on Wednesday 10 October.

Speaking on World Homeless Day, Andy said: “This significant sum will contribute this winter to providing a bed for every rough sleeper here in Greater Manchester. We can make that commitment partly on the back of this contribution. This is real progress – thank you to everyone involved in the book and to everyone who bought it.

“This morning I completed one of my regular early-morning walkabouts of the city centre to see first-hand the reality of the humanitarian crisis that is homelessness and rough sleeping. We still have a long way to go to tackle rough sleeping but the support from individuals like Tony and James means the world.

“We’ve committed in recent weeks to a new campaign, A Bed Every Night. Funds raised through the Mayor’s Homelessness Fund will, from November to March this year, help provide accommodation for every person sleeping rough who wants and needs it. Visit www.bedeverynight.co.uk for more information.”

The day after the Manchester Arena attack on 22 May 2017, local poet Tony Walsh read his poem This is the Place at the vigil outside the Town Hall.

That moment inspired 60 of the city-region’s most influential creative forces to collaborate and produce the book, with all of its proceeds dedicated to charitable causes. The Mayor’s Homelessness Fund, initiated by Andy Burnham on his first day in office and to which he contributes 15% of his salary every month, was one of the beneficiaries.

Tony said: “The book is a beautiful thing and it’s raised just short of £150,000. A third of that has been donated to the Mayor’s Homelessness Fund, and we really do hope it will impact upon what is a truly serious problem for our city-region, the issue of homelessness and people sleeping rough.”

A Bed Every Night will ensure a bed every night for every single person who sleeps rough in Greater Manchester. It will be more than just a bed – those requiring support will have a hot meal, a hot shower, and have access to someone who can offer and co-ordinate the help and support to move off the streets and into a home. 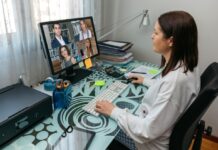