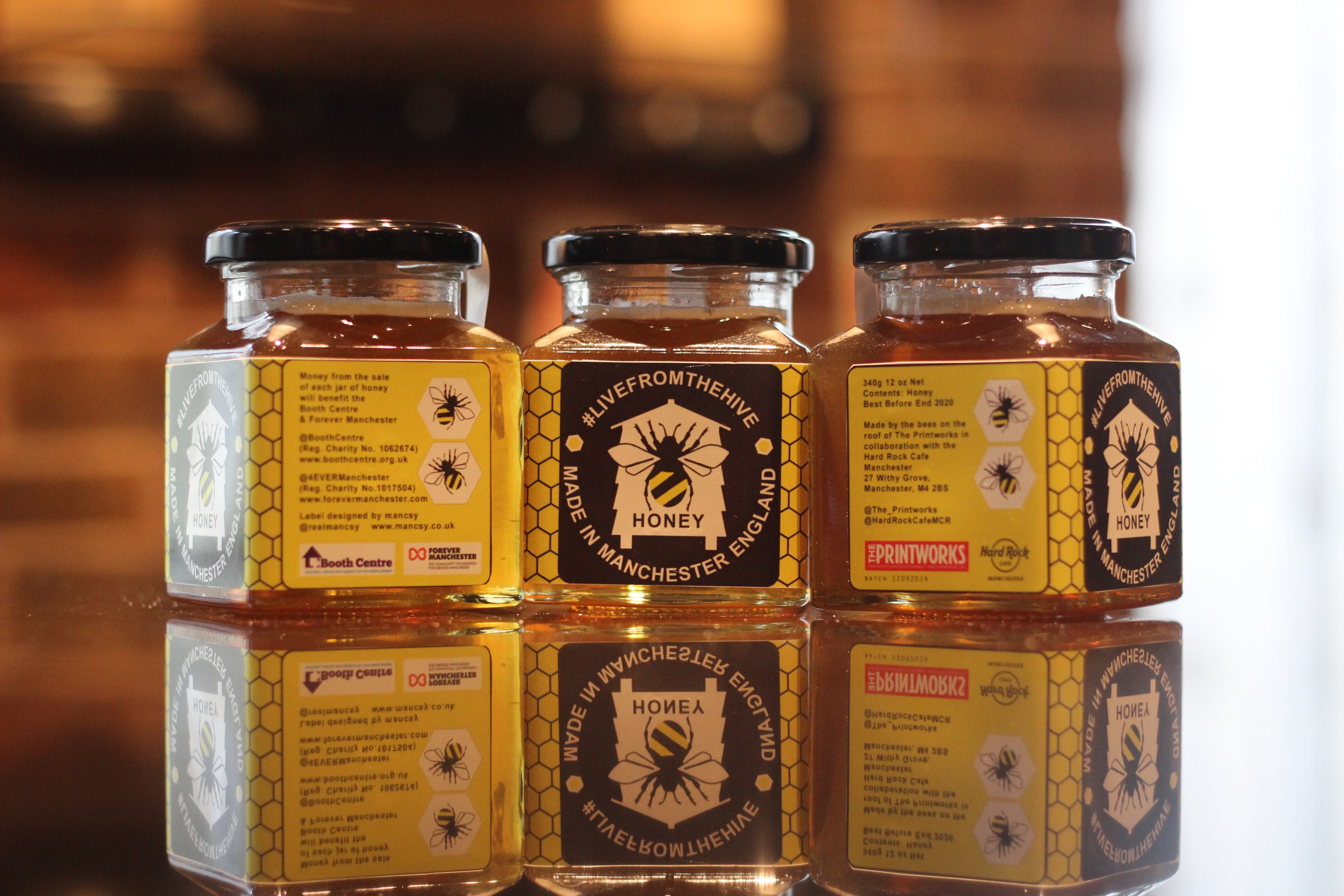 The Printworks and the Hard Rock Cafe are celebrating their second annual honey harvest, with 213 jars of Manchester’s finest #LiveFromTheHive honey, made by the city’s hard-working honey bees, available to buy later this month.
The bees are situated on top of The Printworks, in the much-celebrated rooftop eco garden. Originally launched in 2012, the rooftop garden now hosts four hives – housing approximately 320,000 bees in total.

This year a whopping 213 jars has been produced by the honey bees, almost doubling the yield from last year’s harvest. The #LiveFromTheHive honey will be available from the Hard Rock Cafe at a special launch event on 22nd October, 6pm – 8pm. Tickets for the event are £20 each and include a 12oz jar of honey, a welcome drink and a selection of canapés.
All of the money raised by the sales of the honey, which is £10 a jar, will go to Forever Manchester and The Booth Centre.
2014 heralded the first yield of honey, which was graded ‘exceptional’ by the Manchester District Beekeepers Association. Local artist,‘Mancsy’ designed the labels for the limited edition honey – signing and numbering 30 jars that went on to be sold for as much as £75 each to keen collectors. This year’s jars will use the same label design, but will feature black lids.
To celebrate 15 years of The Printworks and Hard Rock Cafe Manchester creating a buzz in the city, jar number 15 has been signed by the artist and held back for a special auction, designed to raise even more funds for the two Manchester charities.
Centre Director of The Printworks, Fred Booth, says: “The second honey harvest is the biggest batch yet and has created a real buzz at The Printworks. We are proud to be raising even more money for two outstanding Manchester charities and we’re sure that the jars of honey will go on to become collectors items yet again – we have already taken pre-orders for 99 of the 213 jars.
“The rooftop garden and its produce has gone from strength to strength and we are sure that its success will continue for many years to come.”
Emma Livingstone, Sales and Marketing Manager, Hard Rock Cafe Manchester adds: “After all the hard work everyone has put into looking after the bees over the past twelve months, we are delighted that the honey harvest has gone so well. We hope that the hives continue to thrive and that we can keep using the honey to help local charities.”
The bee keeping is very much a hands-on affair with Fred Booth, along with Emma Livingstone, and Hard Rock Cafe Sales and Marketing Co-ordinator, Jack Barton – all qualified Apiarists – tending to the bees on a weekly basis and attending evening sessions and workshops with the Manchester District Beekeepers Association. Cannon Adrian Rhodes, a fully qualified Bee Keeper who manages the hives on the roof of Manchester Cathedral, assists on a weekly and on-call basis.
In addition to the hives, the rooftop eco garden boasts a chicken coop housing six chickens, a wild flower meadow, an orchard, a herb garden and the most recent addition, the Beetle Hotel – a bespoke insect biome installation that provides shelter and habitat for around 100 common ground beetles.

To purchase tickets for the honey launch event on 22nd October or to place your order, please contact Emma Livingstone and Jack Barton on 0161 831 6700.

Man killed in smash after his car failed to stop for police on A6...

Founding Partners of Tackle4MCR have been revealed