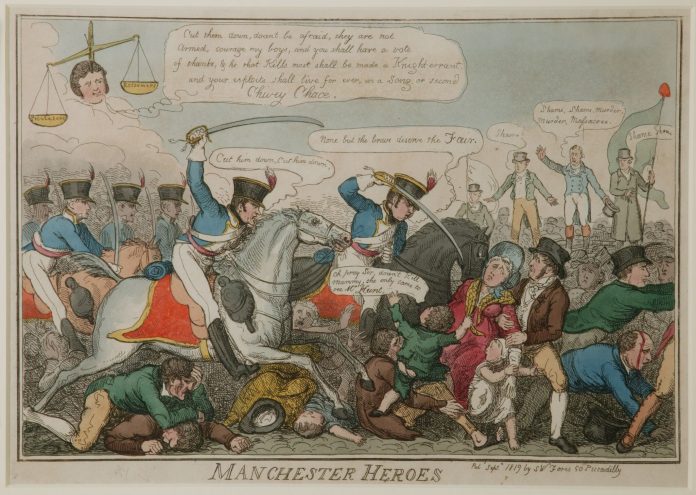 People’s History Museum (PHM) in Manchester is commemorating the bicentenary of the Peterloo Massacre, a monumental event in the city’s history, and a defining moment for Britain’s democracy.  It will do this through a programme of exhibitions, events and learning sessions that will explore the past, present and future of protest.

On 16 August 1819, 60,000 people gathered on St Peter’s Field in Manchester (now the area around St Peter’s Square) seeking some of the rights that we take for granted today.  When local government troops charged at the crowd, the peaceful protest was turned into a massacre with 18 people losing their lives and around 700 injured.

The aftermath of Peterloo is felt 200 years later, in the evolving story of democracy and collective memory of protest. As the national museum of democracy, the stories of ideas worth fighting for live at the People’s History Museum.

The commemorations begin with a collaboration with global arts organisation Cities of Hope which will see internationally acclaimed artist Axel Void creating a 9 metre by 9 metre piece of street art on the museum’s riverside wall.

The piece has been commissioned ahead of the premiere of Mike Leigh’s new film Peterloo (17 October); work commences on Monday 1 October 2018 and is due to be completed on Wednesday 3 October 2018.

The museum cares for a world renowned collection of historic and contemporary banners.  In January 2019 the banners currently on public display will be changed to focus on examples that capture powerful reflections of protest, disruptive flashpoints and the direct actions taken to achieve democratic reform; from Peterloo to today. The new exhibition has been curated to include Greater Manchester moments of protest, demonstrating that the city’s radical roots can be traced back to Peterloo.

The colourful display across two galleries will feature new digital elements including a downloadable podcast, which will give visitors an insight into the stories behind the banners’ messages and the protests in which they played a part.

An exciting programme of community exhibitions will provide a further platform for the exploration of protest through art, technology, memories and photography.  Following an open call for submissions the 2019 selection all highlight issues andideas worth fighting for today.

Opening in March 2019 the museum’s headline exhibition for 2019, Disrupt? Peterloo & Protest, forms a central part ofits bicentenary programme.  The nature of Peterloo and the political repression that followed means there are few artefacts remaining, which in bringing together for the first time key items from the time makes this exhibition all the more powerful.  This includes the New Peterloo Medal, the only one of its kind uncovered to date, which carries the strong and impassioned words of the time, “These things will not endure or be endured”.  A newly commissioned film will feature as part of the exhibition, telling the story of Peterloo and the road to democratic reform.

Alongside the exhibition a gallery will become a Protest Lab, for individuals, communities and organisations to use as anexperimental space for creative campaigning and collective action.

Supported by the Heritage Lottery Fund and in partnership with Manchester Histories, the museum has been developinga series of learning resources.  The aim is to give Greater Manchester school children access to the history of the PeterlooMassacre that took place in their city, which was to be a pivotal moment of protest that shook the nation and the world.

There will be Family Friendly strands of activity running throughout 2019, from the Disrupt? Peterloo & Protest exhibition to dedicated events.  The programme will also include My First Protest Song, a multi-sensory workshop full of tunes from times of change by Lennon, Dylan and Strummer for under 3s and their grown ups.

PHM’s Radical Lates are every second Thursday each month, when the museum’s galleries, shop and cafe are open to explore until 8.00pm, including a programme of thought provoking and quirky after hours events.  In 2019 they will bring ideas around protest to the fore, and introduce different organisations and individuals.

The story of representation explored at PHM

PHM’s galleries cover over two centuries of the fight for representation; its visitors meet the revolutionaries, reformers, workers, voters and citizens who fought for rights and equality.  Defining moments from Peterloo onwards are illuminated, including the suffragette movement and the development of the trade union movement, which were both born in Manchester, but were to define the lives of people all across the UK.  The experience is enhanced for people of all ages with a host of interactive elements that make PHM one of the UK’s most Family Friendly museums.

People’s History Museum is open seven days a week from 10.00am to 5.00pm, Radical Lates are every second Thursday each month (until 8.00pm).  The museum is free to enter with a suggested donation of £5.  To find out about visiting the museum, its learning programme and more, visit www.phm.org.uk.