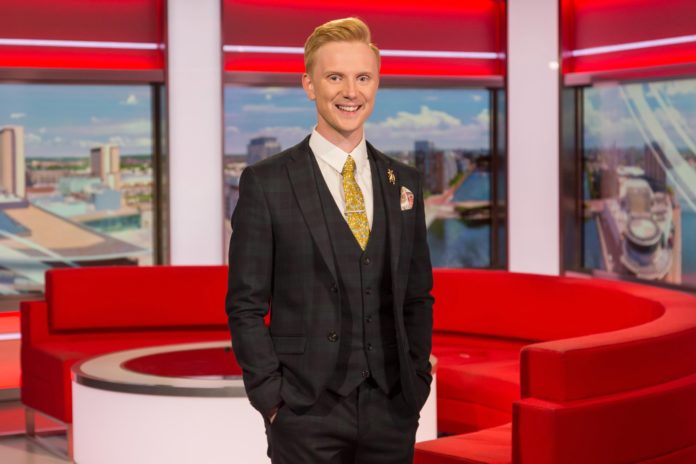 He will join presenters Roger Johnson and Annabel Tiffin every evening at 18:30 from today, Monday 2 September.

Owain is already a familiar face to many viewers across the North having presented on BBC Look North across Yorkshire since 2015. In the past few months, he has occasionally presented the weather on North West Tonight.

Owain’s career began on a Welsh-language children’s news programme before he began working as a reporter and presenter for BBC Wales. He moved into weather after studying meteorology with the Open University and has worked all over the UK with weather presenting cover for various BBC outlets. Owain has also presented on a number of BBC radio stations across Yorkshire and he regularly presents on BBC Radio Wales, alongside Carol Vorderman.

In 2017, Owain’s forecast in celebration of International Drag Day went viral as he paid tribute to drag queens from RuPaul’s Drag Race. He has also collaborated with Netflix and Queer Eye’s Karamo Brown for a series of videos celebrating Pride events across the country.

Owain Wyn Evans says: “It’s going to be a real honour to present the weather every evening on BBC North West Tonight. I’ve presented quite a few programmes already, and Annabel and Roger are absolute darlings – I’m very excited to be part of such a well-loved programme! After working in Wales, London and Yorkshire I can’t wait to start working in the North West permanently.

“I grew up in a small, ex-mining town called Ammanford in South-West Wales. An area surrounded by both gorgeous countryside and industrial cities, very similar to parts of the North West in that respect.”

BBC North West Tonight presenters Roger Johnson and Annabel Tiffin are looking forward to working with Owain on a regular basis. Their friend and colleague, and previous NWT weather presenter, Dianne Oxberry, died earlier this year after a short illness.

Presenter Roger Johnson said: “Dianne was adored by the North West Tonight viewers and we all still miss her. In the months since she died several excellent weather presenters, including Owain, have helped us. We’ve had a positive reaction from many viewers and we are sure they will make him welcome.”