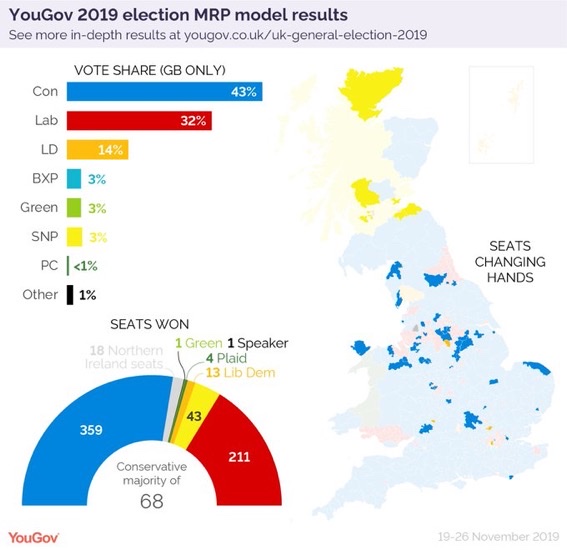 The much awaited YouGov MRP poll is out and it is predicting a sizeable Tory majority.

It predicts the Tories winning 359 seats, Labour on 211, The SNP on 43 and the Lib Dems with 13 giving the Tories a majority of sixty eight.

The big shock in Greater Manchester is that it predicts the Tories taking the seat of Leigh and Bury South while holding onto key battlegrounds in Altrincham, Hazel Grove, Cheadle and Bolton West.

The Conservatives lead by 1 point in Leigh which Labour won last time with a majority of 9,554.

Nationwide in terms of seats won this would be the the Labour party’s worst performance since 1983.

The model has the Conservatives gaining 47 seats; 44 of which are from Labour, two are from the Lib Dems while The SNP are on course to secure a further eight seats, although crucially for the Tories’ chance of securing their majority, only two come from Boris Johnson’s party By contrast, Labour are set to lose five seats to the SNP, with the Lib Dems losing one.

The spectre of first past the post returns to haunt the Lib Dems once more, with their six percentage point increase in the vote since 2017 being rewarded with just four new seats.

Most seats changing hands are ones that Labour won in 2017 that are now set to be taken by the Conservatives.

The poll currently shows none of the MPs who have defected to the Lib Dems in recent months winning the seats in which they are standing. Among the defectors from the Conservatives, Sarah Wollaston is 19 points behind in Totnes, Antoinette Sandbach is trailing by 33 points in Eddisbury, Philip Lee is behind by 10 points in Wokingham, and Sam Gyimah is 8 points down in Kensington.

The three Labour defectors are also struggling. Chuka Umunna is 13 points behind in Cities of London and Westminster, Luciana Berger is 18 points behind in Finchley and Golders Green, and Angela Smith is trailing by 34 points in Altrincham and Sale West.