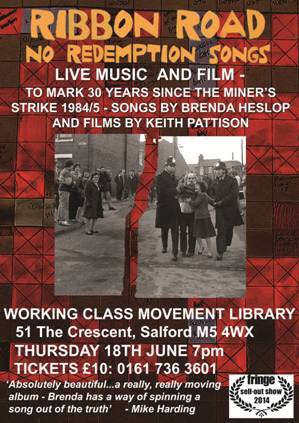 No Redemption Songs marks 30 years since the miners’ strike and tells the story in images and song of a community rallying together against implacable opposition.

During 1984/5 Keith Pattison documented the miners’ strike at Easington Colliery through an in-depth series of black and white photographs following the striking miners and their families through the optimism of August, through the deepening pessimism of winter, to the final vote to return to work.

Keith became the miners’ official photographer, often having to smuggle his films out while the action was happening all around him.

After meeting with Keith during 2013, Northumberland-based songwriter Brenda Heslop wrote a 10 piece song cycle, No Redemption Songs, inspired by the photographs and recent visits to Easington Colliery.

No Redemption Songs, showcasing both the film and the songs, was performed to a sold-out audience at last year’s Edinburgh Festival Fringe.

In the words of Ribbon Road’s Jill Heslop, ‘In the present day, as government policies castigating against ‘broken Britain’ gain momentum, the film and songs are potently topical.

Behind the scenes: Homebird DJ Paulette takes shape in The Lowry galleries.

Countdown to Hamlet at the Royal Exchange Theatre