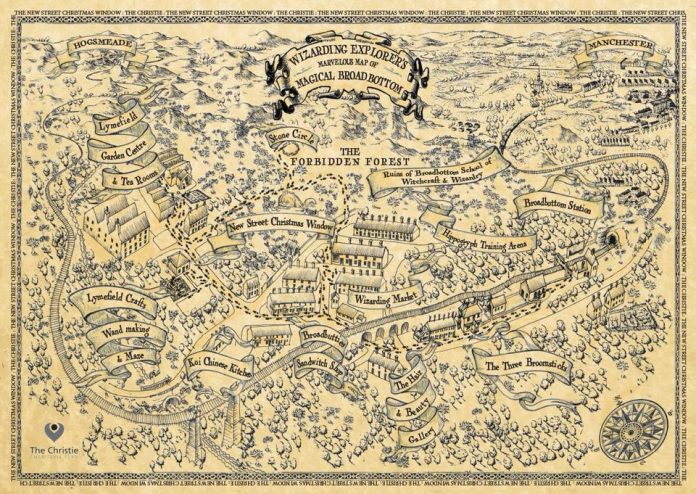 Budding wizards and witches will want to visit Broadbottom in Tameside on Sunday December 2nd as it morphs into a fantastical Harry Potter world, in aid of The Christie.

Inspired by J.K. Rowling’s smash hit book series and the blockbuster film franchise, the village has an action-packed line up of activities Potterheads will love.

Hedwig fans will love the owl display at Lymefield Garden Centre and nearby Lymefield Arts and Craft Centre will be host to wand making sessions and a Triwizard Training Maze.

From 2pm there will be a Magical Market in the village Community Centre selling Harry Potter-themed goods, including a selection of wands, wizard cloaks, capes and hats from ‘Gladrags Wizardwear’, as well as printed goods, spell-making and potion classes. Hot ‘butterbeer’ and special cakes will also be available from ‘Madam Puddifoot’s Tea Room’.

Hardened Potter fans will not want to miss the main event from 5pm on New Street, where a magical miniature Harry Potter ‘Hogsmeade village’ will be revealed, to the accompaniment of live music, projections, fireworks and special effects. Themed refreshments will also be served.

The after-party will be held in the ‘Three Broomsticks’ village pub, aka Harewood Arms, where a specially brewed Wizard Ale will be on draft.

Dick Longdin, organiser, says: “Broadbottom’s narrow streets, old cottages and community spirit lends itself perfectly to the creation of a Harry Potter world. We wanted to create a day which would appeal to people within and outside of the village so we can raise as much money as possible for The Christie.”

Dick’s partner’s mum died of pancreatic cancer in 2010 and since then they have created an annual themed Christmas display in their front window, known locally as the New Street Christmas Window, which has attracted thousands of visitors while raising over £3,000.00 for The Christie.

Things to do during Half Term at the Corn Exchange