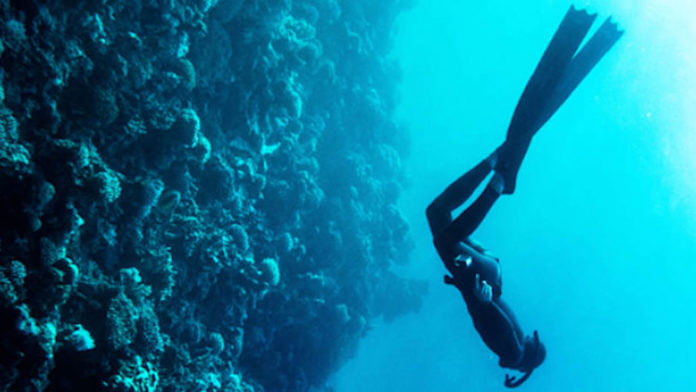 There have been so many deaths at this massive, old, flooded quarry over the years they’ve nick- named it ‘The Incident Pit’.

The bottom of it has never been reached and so there’s an obsession by divers to be the first to get there. And as the authorities threaten to close the place as a dive site for good, this obsession is intensified as the chance to be the conqueror of the Pit is gone forever.

In the wake of the death of its latest victim, Rob, views are polarised in the club. As a result, Fiona now plans to give up diving altogether. Martin however is more determined than ever to be that conqueror. But as everyone refuses to go with him he is forced the consider breaking the hallowed diving rule; never dive alone.

Fiona and Martin argue furiously about what counts as bravery and what as recklessness. When does ambition turn into suicide? But undeterred, Martin carries on. After all, he argues; “What’s the point of living if we don’t take risks?” And so he plans his dive – but what really lies at the bottom of the Incident Pit?

Following the success of his last play, Married. But Lonely, Chris Leicester’s latest play The Incident Pit comes to Waterside. Starring Carl Wharton and Miranda Benjamin, this is Chris Leicester’s ninth new, original play since 1998.   Continuing his theme of original story-based work, the piece explores another intriguing and unusual world which will captivate audiences.

Leicester has also written a novel of the same name, adapted from the play which will be published later in the year. This follows the success of his last book, Hurricane Hill which received widespread critical, acclaim.