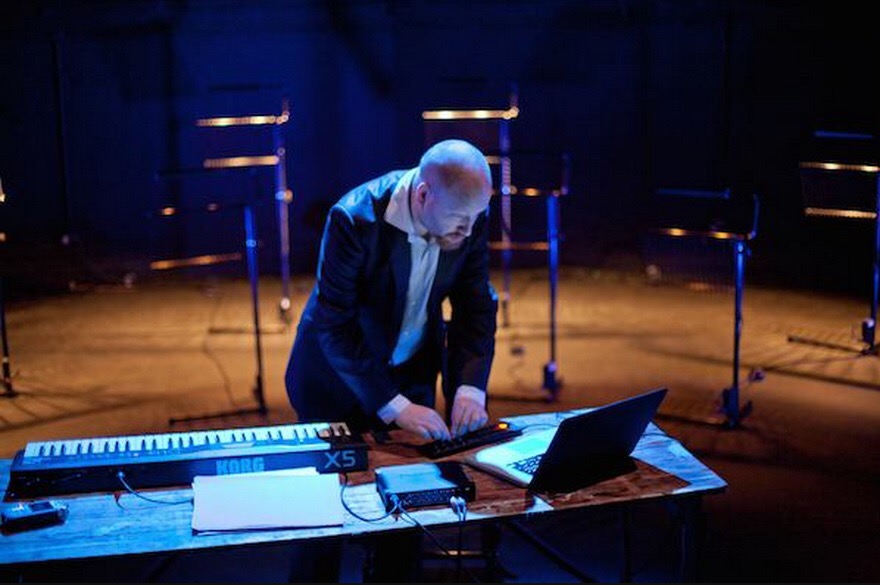 A symphony orchestra arrive in the capital city of a tropical country, to play a new piece of music by a contemporary composer. On the day of the premiere, before they even set foot in the concert hall, a military coup erupts around them. As the city becomes a war zone, the players are forced to venture from their hotels, some of them miles apart, to try and re-unite with their colleagues and attempt to escape.
The Bullet and the Bass Trombone’s fractured, intricate narrative is told by the composer, who is left to piece together events from diary entries, news reports and recorded interviews. The result is a carefully constructed fugue of voices and music; a modern hymn to people and places now lost.
Performed in Sleepdogs’ trademark sparse, crafted and clear style, The Bullet and the Bass Trombone is the latest in a series of works by the company which investigate storytelling, narrative, sound and music. Previous work includes their dark Christmas fable The Morpeth Carol, currently under commission by BBC Radio 4 and the acclaimed miniature Astronaut.
The Bullet and the Bass Trombone was commissioned by Bristol Ferment, Bristol Old Vic’s artist development strand and premiered at Bristol Old Vic in November 2012.
It was also shown at the Gate Theatre in London as part of the Forest Fringe takeover, where it was described by writer Andrew Haydon as “Harrowing, intelligent, beautifully crafted and deftly performed. And ultimately incredibly uplifting in an impossible-to-describe kind of way.”
The Bullet and the Bass Trombone is produced by MAYK, the producing organisation led by Kate Yedigaroff and Matthew Austin, directors of Bristol’s annual contemporary theatre festival, Mayfest.
Sleepdogs is a collaboration between writer/composer Timothy X Atack and producer/director Tanuja Amarasuriya. They work with stories, hybrid genres and prompts to the imagination using theatre, film and anything else that might possibly work. They’ve been commissioned by Bristol Old Vic, Arnolfini, BBC Radio 4, BBC Film Lab, Battersea Arts Centre, Forest Fringe and Paines Plough, amongst others.
Friday 1 & Saturday 2 May, 7.30 pm
The Studio, The Royal Exchange Theatre
The Bullet and the Bass Trombone
By Sleepdogs
Written and performed by Timothy X Atack
Directed by Tanuja Amarasuriya

Santa’s arrived ready for the big switch on