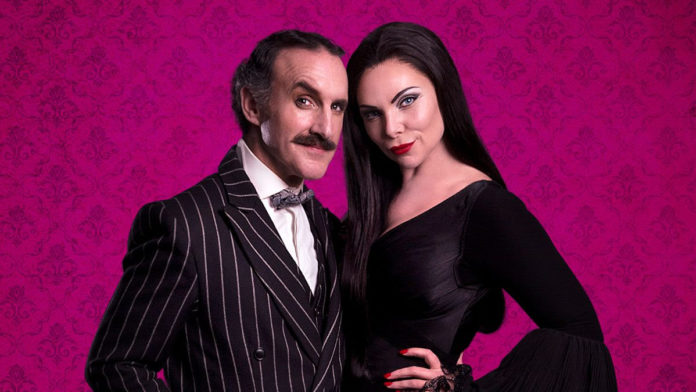 Samantha Womack & Cameron Blackely to revive their roles as Morticia & Gomez Addams in The Addams Family at The Lowry.

This follows a highly successful premiere tour in 2017. 2020 will once again be directed by Matthew White.

The story focuses on Wednesday Addams, the ultimate princess of darkness who has grown up and has a shocking secret that only Gomez knows; she has fallen in love with a sweet, smart young man from a respectable family!

Now, Gomez Addams must do something he’s never done before — keep a secret from his beloved wife, Morticia.  Everything will change for the whole family on the fateful night they host a dinner for Wednesday’s “normal” boyfriend and his parents.  All the usual clan are present – Uncle Fester, Lurch, Pugsley et al.
Samantha Womack is best known for her long-running role as Ronnie Mitchell in BBC1’s EastEnders.  Most recently, Samantha guest starred in last year’s series of Silent Witness and she has also played Tanya Dawson for three series of the hit comedy Mount Pleasant.

Her stage credits include Nellie Forbush in the Lincoln Center Theater’s Tony Award-winning production of South Pacific (Barbican Theatre & UK Tour), Michael Grandage’s West End production of Guys & Dolls opposite Patrick Swayze (Piccadilly Theatre) and Peter Hall’s production of Pinter’s Betrayal (Theatre Royal Bath).  Most recently, Samantha starred in The Girl on the Train in the West End and on a UK Tour.

Cameron Blakely’s previous theatre credits include the role of Thenardier in Les Misérables, a role he played for two years in London’s West End. Cameron was also part of the 25th Anniversary at the O2, where he played Bamatabois.

British director Matthew White has directed the UK Tours of Mr Stink, Carousel and The Producers, the UK Tour and West End run of the multi-award-winning Top Hat, and, for the Menier Chocolate Factory, The Boy Friend, She Loves Me, Candide, Sweet Charity (and West End) and Little Shop of Horrors (and West End).