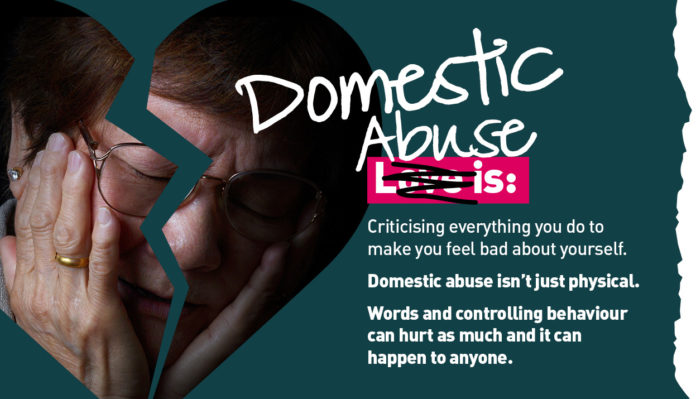 A campaign to help people recognise the signs of domestic abuse will launch in Salford on Valentine’s Day.

Love – Domestic abuse is will send out 14 messages about how perpetrators control their victims.

These include emotional blackmail, cutting people off from their family and friends, controlling the purse strings so victims are left without money and the classic promises that violence will not happen again – until the next time.

The campaign also points out that love is not stalking and harassment, undermining people’s confidence and threatening to harm them or yourself if they try to leave.

It follows a social media campaign in November in which 16 survivors of domestic abuse sent messages of hope to people still in abusive relationships. It reached more than 516,400 people and over 600 men and women called Salford Women’s Aid or checked out their website as a result.

Councillor David Lancaster, lead member for environment and community safety, said the new campaign was designed to show domestic abuse is not all about violence.

“Sadly people don’t realise they are victims because the control is applied slowly and subtly, isolating them and breaking down their confidence,” he said.

One victim said it was two years into the relationship before she realised she had no friends, never saw her family, had no money and was not allowed to leave the house unless her husband allowed her to. That’s not love and no-one should have to live that way.

There is help out there from people who will listen, will understand and will believe and support you. Please talk to your GP or a local or national charity and they will help you find a way out. If something doesn’t feel right, trust your instincts and talk to a professional and if you’re in immediate danger call 999.”

The campaign is being run by Salford Community Safety Partnership and the Salford safeguarding boards for children and adults which bring together Salford City Council, Greater Manchester Police and other partner organisations to fight crime and keep residents safe in the city. Later this year they aim to roll the campaign out into the community through billboards and other advertising.

“Domestic abuse can happen to anyone from any walk of life, male or female and we want people to recognise that a jealous, controlling partner isn’t showing their love – they are abusers.

It does take courage to open up and talk about it but you will be listened to and you will be believed. If you can do that we and other organisations can work with you to help you decide your next steps. We have seen many people overcome horrific circumstances and come back from rock bottom to lead safe and happy lives. There is always hope.”

If you are experiencing domestic abuse and want to speak to someone about it you can contact the 24/7 national helpline (which also has translators for people whose first language is not English) on 0808 2000 247or click here for details of various organisations.