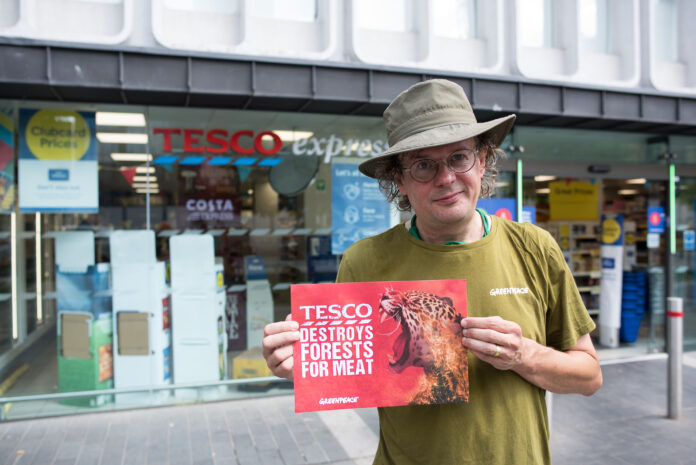 Tesco stores across Greater Manchester have been visited by concerned shoppers calling on the supermarket giant to cut ties with forest destroyers, as part of an escalating nationwide protest.

Malcolm Atkinson, a music therapist who had never taken part in a Greenpeace action before, said

‘The potential loss of the Amazon rainforest in my lifetime is what made me do this. I’d never done anything like this before and so I wondered what the reaction from the store managers would be. In the end, they were all very friendly, and most wanted to know more about the campaign.’

Concerned customers have visited more than 715 of Tesco’s almost 3000 stores, with many more visits planned in the coming weeks. Throughout May and June, Greenpeace volunteers also left stencilled messages reading ‘Tesco meat = deforestation’ outside more than 270 stores, including more than a dozen in Greater Manchester.

Research published in Nature confirmed that the Brazilian Amazon has now reached a tipping point and is emitting more carbon than it stores as a result of human intervention .

The Independent and DeSmog also reported recently that global meat companies are “routinely underreporting emissions, undermining climate science and casting doubt on plant-based alternatives”, and condemned the ‘tobacco company tactics’ used to downplay the harmful role that industrial meat has on our climate .

Despite Tesco claiming to have met its deforestation targets, its meat is not deforestation-free. It buys British chicken and pork from suppliers owned by notorious rainforest-destroyer, JBS. JBS recently admitted it would accept deforestation in its supply chain for another 14 years .

And Tesco continues to sell more soya-fed, factory-farmed meat than any other UK supermarket. It has already failed to keep its promise of zero-deforestation by 2020 and its plans to buy soya ‘only from deforestation-free areas’ by 2025 are meaningless given the complete collapse in 2019 of talks involving traders like Cargill to agree protection for whole areas from soya .

Martin Porter from the Manchester Greenpeace Group said ‘This week the IPCC said the world needs to take radical action on the climate crisis or we face catastrophe. After burning fossil fuels, deforestation is the key driver of climate change, and the main cause of deforestation is animal agriculture. Tesco cares about their image and the link to forest destroyers is not making them look good. We’ll keep taking the message that Tesco meat = deforestation directly to them until the UK’s largest supermarket lives up to its promise to remove deforestation from its supply chain.’