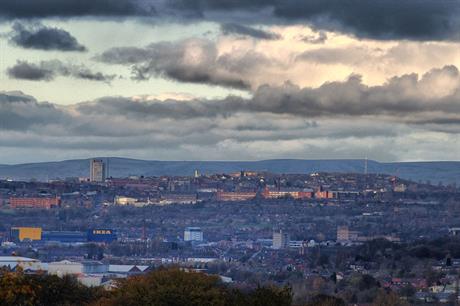 A regeneration of Stockport Town Centre,plans for ten of thousands of affordable homes, huge cuts to Green belt development and sixty five transport projects will be revealed at a special event tomorrow.

Mayor Andy Burnham, alongside Deputy Mayors Sir Richard Leese and Bev Hughes, and the leaders of Greater Manchester councils, will set out a series of bold and far-reaching new housing and transport proposals that showcase the region as a confident, ambitious hub which places its people at its heart.

The plan focuses on making the most of Greater Manchester’s brownfield sites, prioritising redevelopment of town centres and other sustainable locations. It will also help to address the housing crisis with a minimum target of 50,000 additional affordable homes – 30,000 of which will be social housing.

The net loss of green belt has been reduced by more than half. And – as an illustration of the radical approach that Greater Manchester is taking to environmental policy – the city-region is making clear its opposition to fracking.

Other major announcements around clean air and support for young people will also be made at the event.

The Mayor said: “In this time of national social and economic uncertainty, and with politics in Westminster paralysed by Brexit, Greater Manchester is taking the initiative and setting out an innovative blueprint to give people, communities and businesses hope and confidence for the future.

“When we consulted people on the first spatial framework, the public were clear that we hadn’t got the balance right. We listened, reflected, and can now present a radical re-write as promised. It also lays the foundations for radical reform in other policy areas such as housing, the environment and transport.

“Together, we are harnessing the full power of the most advanced devolution deal of any city-region in England for the benefit of our three million residents. And we are putting together the pieces of the jigsaw to reveal the big picture – a Greater Manchester where prosperity, opportunity, health, hope and happiness are widely and fairly shared across all our people and places.”

As demonstrated over Christmas, towns across the country are struggling under an old model as hotspots for shopping and commerce with footfall declining and consumers instead opting to shop online. Greater Manchester’s planned reinvention of these well-developed and well-connected urban spaces ushers in a bold new era for swathes of the city-region.

“The shift towards redeveloping our towns not only breathes new life into them but also relieves pressure to build on the city-region’s green belt,” the Mayor added.

“Towns are ideally suited to a bold new future as centres for 21st century living – they are developed urban spaces with local amenities close by as well as existing transport hubs for our buses, trams, trains and roads.

“It is a tough time for the high-street, but with Greater Manchester’s bold vision we can make our proud towns a success story once again.”

Transport is at the heart of the city-region’s ongoing success. Greater Manchester’s 2040 Transport Strategy Delivery Plan sets out all the transport improvements to be implemented by 2025, as well as longer-term plans that will in part ensure the success of the GMSF.

The transport plan identifies more than 65 projects that will be completed within the next five years, including: Metrolink’s Trafford Park Line; the purchase of 27 new trams; an upgrade of Salford Central railway station; a £160m new walking and cycling infrastructure across all 10 districts; expanding the city-region’s electric vehicle charging network; and new interchanges in Tameside and Stockport.

Greater Manchester’s vision is that by 2040, half of all daily trips in Greater Manchester will be made by public transport, cycling and walking, especially those shorter journeys around local neighbourhoods. This will mean a million more trips each day using sustainable modes of travel.

Poor air quality is now the biggest environmental risk to public health facing the UK, and Greater Manchester has been working hard for some time to clean up our air.

A coordinated plan to bring levels of nitrogen dioxide (NO2) within legal limits is currently being developed by all 10 local authorities in Greater Manchester, working closely with GMCA and TfGM.

Andy added: “As we outline the city-region’s new plans for homes and jobs, transport infrastructure, clean air and the environment, I want to highlight Greater Manchester’s commitment to putting people at the heart of everything we do. We are a city-region with a radical spirit in our DNA – we have always delivered industrial innovations whilst never forgetting the people that power that economy.

Manchester is beaten by Liverpool as ESPN’s Greatest Sporting City