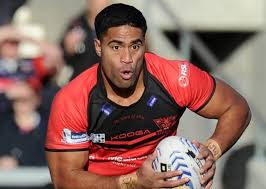 Salford Red Devils forward Lama Tasi will serve a one-game suspension after pleading guilty of a Grade B Strike with Shoulder.

The former Samoan international was put on report in the first half of the Red Devils Ladbrokes Challenge Cup semi-final against Wigan Warriors on Sunday.

The 27-year-old re-signed for the Red Devils at the start of the 2017 season after spending a year with fellow Super League side St Helens. Tasi made over 50 appearances throughout his first spell with Salford between 2014 and 2015.

Red Devils falter in final game of the season